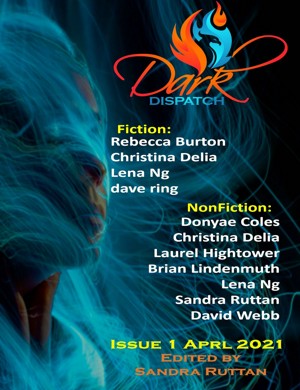 Dark Dispatch is published by Brian Lindenmuth and edited by Sandra Ruttan.

This issue also features an interview with writer and publisher dave ring.

One of Sandra Ruttan's most painful childhood memories is of her mom driving her and her sister to the town dump, and her stuffed white lamb being pried from her arms and tossed in the garbage. She was a walking disaster in her formative years. At age eight she was hit by a car while riding her bike home and her head was cut open. Just before her ninth birthday she was running along the beach and landed on broken glass, and her foot was partially severed. The muscle had to be stitched back together, leaving some uncertainty about whether she'd walk again, and the doctor was so fed up with her screaming he told her if she didn't shut up he'd cut her foot off. She went to school with the doctor's son, and forever felt sorry for him.

After her tenth birthday she fell down a waterfall and almost drowned. Her later adventures included being in Seville when they found 4.5 tons of explosives set to blow up the Semana Santa parade and being in a car crash in the Sahara Desert. There is absolutely no explanation for how she's managed to stay alive as long as she has. Keep up to date at her website, www.sandraruttan.com or http://sruttan.wordpress.com/

You have subscribed to alerts for Sandra Ruttan.

You have been added to Sandra Ruttan's favorite list.

You can also sign-up to receive email notifications whenever Sandra Ruttan releases a new book.