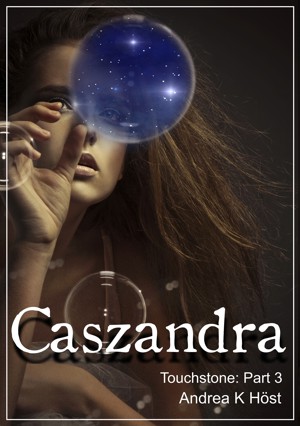 By Andrea K Höst
Rated 4.83/5 based on 6 reviews
Part 3 of the Touchstone Trilogy.

Cassandra Devlin doesn’t know what she's for. But she knows she's running out of time.

Since Cass was rescued from the abandoned world of Muina progress has been made unravelling its long-ago disaster, but too many questions remain. Can Cass keep herself together long enough to find a solution, or will space tear itself apart? More
Part 3 of the Touchstone Trilogy.

Cassandra Devlin doesn’t know what she's for. But she knows she's running out of time.

Since Cass was rescued from the abandoned world of Muina, the Aussie teen has proven more than useful to the people of Tare. Expeditions to their home world no longer end in slaughter. The teaching city of Kalasa has been unlocked. After years of searching for answers, they are starting to make progress.

But space is tearing itself apart. Ionoth attack in ever-greater numbers. And "the useful stray" has been injured so many times that the Tarens hesitate to use her for fear of losing her.

With one particular Taren now her most important person, Cass is determined to contribute everything she can, and hopes to find some answers of her own. What is the link between Muina and Earth? Why are the reclusive Nurans so interested in 'rescuing' her? And what role in the crisis do the inhuman Cruzatch play?

About the Series: Touchstone

Caszandra is the final volume in Andrea K Höst's Touchstone trilogy. This review contains minor spoilers for the previous books (mostly just the relationship kind). If you haven't yet, I suggest reading my reviews for the earlier books — Stray and Lab Rat One — before reading the rest of this review (and ideally, reading the first two books themselves too). The series is about Cass, a Sydney girl, who accidentally falls through a tear in reality onto another planet, meets psychic space ninjas, and discovers that she has some powers of her own.

Caszandra picks up where Lab Rat One left off. Which is good because there was a bit of a relationshippy cliffhanger at the end of the previous book. Cass's relationship with Ruuel (now called Kaoren, his first name) progresses quite quickly in terms of seriousness, which made me a bit wary at first, but which turned out for the best in terms of story telling, I've decided. Another related aspect, which I don't want to be explicit about because spoilers, also made me a little uncomfortable, bu ultimately I think that was more due to my own dissimilarity to Cass as a person than anything else.

Caszandra continues the overarching plot well established in the earlier books: learning about Cass's power, fighting monsters and trying to learn about Muina's past. Muina being the planet Cass was first transported to and which had remained inaccessible to the alien people for a thousand years until she came along. This book ups the danger levels and the stakes. The Setari (psychic space ninjas) and Cass were always trying to protect people but in the lead up to the conclusion, the urgency for definitive world-saving becomes extreme. And, unsurprisingly, Cass continues to almost die in new and exciting ways.

The climax might have lost a smidge of tension due to the diary nature of the narrative — we knew Cass survived because she told us about it all being over before regaling us with the tale. However it was still all very dramatic and didn't loose any world-saving oomph. The end was satisfying in tying everything up nicely and I think other fans of the series will approve. (And for readers that want more, there's always the Gratuitous Epilogue, which I admit to skimming and reading the last chapter of.)

I don't recommend reading Caszandra without reading Stray and Lab Rat One fist. However, I can't imagine why readers who enjoyed the first two wouldn't go on to the final volume. I enjoyed this series a lot and I will definitely be reading more of Höst's books in the future.

You can read more of my reviews on my blog.

*Deep Sigh* And so this story ends… At the moment I’m not happy that this was the last story about Cass and the Sentari. I wanna know more! Fortunately I found out that there will be a free epilogue coming out in two weeks, so I’m looking forward to finding out who ends up with who ^^ (most important info )

Just like Lab Rat One, a lot was happening in this one. To the extend that I can’t even remember what exactly happened at the beginning, only the ending is still freshly printed in my memory . But that’s not a problem for me, it really makes me want to start reading it again, the same reaction I had as with Lab Rat One. And as I said, I can’t give a bigger compliment to a writer

I’m so glad that Cass and Kaoren are finally a couple. I was so excited for Cass at the ending of Lab Rat One (I actually read the ending a couple of times, loved it that much )! In this book we find if their relation will work. I liked it a lot that there is no “destined lover” in this series, just a girl and boy falling in love. You also don’t see that she loves him back in every sentence. Of course there are moments where she swoons (especially after watching her secret Kaoren collection ) but that’s totally understandable . And also in this book there are some great “squeel” moments and Cass has some really funny comments about Ruuel, that will make you laugh out loud ^^

As usual Cass spends some time in medical, with all the tests and scans, although this time she endures it a lot better. They even start to get an idea of what her powers are and what she can do with it, till the moment she does something totally unexpecting again. But that’s just Cass

Overall rating 5 hearts. It was a great read and I had a hard time putting it down to go to my lectures (you can guess that I wasn’t paying much attention, wanted to know how the story continued ). I really loved the world Andrea K. Höst described with its amazing characters and I’m sad to say goodbye to it all. Although I have still the epilogue to look forward to ^^

Cazandra by Andrea Host is the (sadly) third and last book of the Touchstone Trilogy. I am very sad to leave the world of Cassandra and her “psychic ninja” friends. The growing relationship between Cassandra and her “ninja” as well as her growing maturity and confidence was satisfying to read. The book was suspenseful and exciting and the conclusion wrapped everything up nicely so we weren't left worrying about any of these characters that we have come to care about. Highly recommended for people who enjoy YA fantasy or science fiction or anyone who enjoys a good sf&f tale well told.

I eagerly awaited this book, and wasn't disappointed by the conclusion to the Touchstone Trilogy. I had read the first two books numerous times, and immediately jumped in the day this book became available. Cassandra is so likable and human, and I love how her relationships develop. She is practical, smart, and grounded. I had no idea how the trilogy would end, and the author kept me guessing and surprised throughout. A very satisfying trilogy, and some of the most gripping books I've read in ages.

My first laugh out loud moment was the "Om nom nom nom" line. You won't have to wait long, its quite early in. I've loved reading this series. I've never been able to figure out whats going to happen next, so every diary entry is a surprise. The Cassandra character is so appealing, I think, because the honest diary entries portray a real person with limits, flaws, self depreciating humour and a striving to be better than she is. Or thinks she is. While the style is very different, I think the last author whose characters drew me in this much was Lois McMaster Bujold. Awaiting the gratuitous freebie epilogue impatiently.

I've really enjoyed reading (and rereading the first two books quite a few times) the Touchstone trilogy and I thought Caszandra was a good wrap-up of the story. Never a dull moment in Cass's new life and her life keeps dramatically changing at a very brisk pace (understandable since this is the last book). I would have loved to read more of Kaoren's reactions, comments and questions of Cass's diary entries (maybe we'll get to read some in the gratuitous epilogue coming soon?).