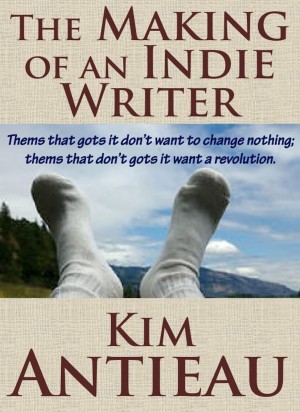 The Making of an Indie Writer

By Kim Antieau
Rated 5.00/5 based on 2 reviews
Kim Antieau published 6 novels with major publishers over 15 years. But when she finished her latest, The Fish Wife, she chose to publish it herself. Why would she do this? In a word: freedom. Indie publishing gives her the freedom to write what she wants and bring it directly to her readers. This essay explains how she embraced indie publishing and what it means for indie readers everywhere. More
Kim Antieau has had her books published by St. Martin’s Press, Simon and Schuster, and Houghton Mifflin. She’s also been published by small presses, including Aqueduct Press, Silver Salamander Press, and Pulphouse Publishing. In addition, she’s had dozens of short stories, poems, and essays published in various magazines, anthologies, and websites. She’s been nominated for awards, had her work reprinted in numerous best-of-the-year anthologies, and has received acclaim from critics and readers for many years. It sounds like a pretty solid career in traditional publishing. And yet, over the past year, Kim has transformed herself into an indie writer, publishing many of her novels through her own publishing company, Green Snake Publishing. Why would a writer do that? In a word: freedom. Indie writers have creative freedom that many traditionally published writers can only dream about. This essay explains her decision to be at the forefront of the indie revolution and what it means for her career and for readers who love independent voices.
Available ebook formats: epub mobi pdf rtf lrf pdb txt html
First 10% Sample: epub mobi (Kindle) lrf more Online Reader
pdb
Price: $2.99 USD
Buy Add to Library Give as a Gift
How gifting works
Create Widget
Tags: writing publishing creativity essay writer independent author storytelling storyteller indie author authorship indie publishing kim antieau green snake publishing
About Kim Antieau

Kim Antieau has had dozens of short stories and essays published, along with many novels, including Coyote Cowgirl, Church of the Old Mermaids, Ruby's Imagine, The Fish Wife, Her Frozen Wild, and The Jigsaw Woman. She currently lives in the Pacific Northwest most of the time and in the Sonoran Desert some of the time, with her husband, writer Mario Milosevic.

Reviews of The Making of an Indie Writer by Kim Antieau

In some ways, this little book is a summary of all the complaints about the traditional writing path--the long, frustrating wrestling match with agents, editors, publishers. That's part of its strength. The other part is that it's a personal story that should speak to anyone who's still on the fence about whether to tread that traditional path or go it on their own.

The end of the essay does a very nice job of summing up the traditional path. "When we were telling an artist friend of ours that agents and then editors often ask writers to rewrite their work, he frowned and said, “Isn’t that kind of like someone looking at one of my paintings and telling me I need to take this chunk of paint off here and paint this part of the canvas with a different color over there? And if I do all that, they’ll pay me.”

“It is like that,” I said, “only it’s worse. Half the time they’ll ask you to make those changes but they don’t pay you for it. They end up saying, ‘geez, I guess I still don’t want it.’”

It isn't about traditional publishing being evil; it's about finding the way that works for you.

Thanks Kim, very recognizable even if I'm over in Europe. I think your essay will resonate with many good authors who have struggled with the traditional publishing model.

You have subscribed to alerts for Kim Antieau.

You have been added to Kim Antieau's favorite list.

You can also sign-up to receive email notifications whenever Kim Antieau releases a new book.