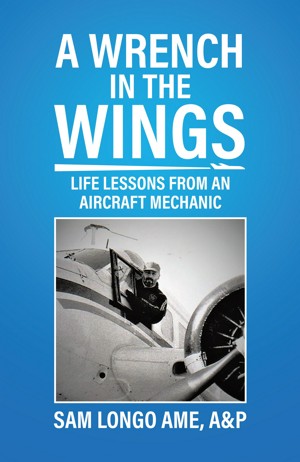 A Wrench in the Wings: Life Lessons from an Aircraft Mechanic

Sam Longo has over 40 years' experience in the aircraft maintenance field. He holds a Canadian Aircraft Maintenance Engineers license (AME M1, M2) as well as an American A&P license (Airframe and Powerplant). During the '70s and '80s he plied his trade, maintaining aircraft for such companies as Nordair, De Havilland Canada and Air Canada before becoming a professor in Centennial College's Aerospace Department.

Centennial College's Aircraft Maintenance Program is one of the longest running aircraft technical training facilities in Canada. During his tenure at the college, in addition to his technical teaching, he spent many years as the Aerospace Hangar and Shop Coordinator. In addition, he holds a certificate in Adult Education from St. Francis Xavier University, and is a qualified trainer in Aviation Human Factors. He is the past president of the Aircraft Maintenance Engineers of Ontario as well as the past national president of the Aircraft Maintenance Engineers of Canada (AMEC/TEAC).

After retiring from Centennial College, he continued to write a regular column, "AMU Chronicles," for Air Maintenance Update magazine (AMU) as well as the vintage motorcycle column "Long Ago" for Cycle Canada. His freelance writing has also appeared in The Toronto Star, The Globe and Mail, Wings Magazine, Helicopter Magazine, Skies Magazine as well as every major Canadian motorcycling publication. When not pursuing his writing endeavors, he can be found in his Toronto workshop restoring award-winning vintage motorcycles.

Reviews of A Wrench in the Wings: Life Lessons from an Aircraft Mechanic by Sam Longo AME A&P

Would you like to favorite Sam Longo AME A&amp;P?

You have been added to Sam Longo AME A&amp;P's favorite list.