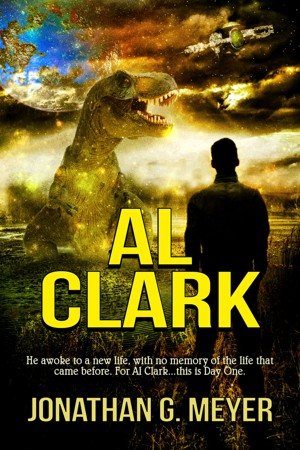 By Jonathan G. Meyer
Rated 4.00/5 based on 1 review
Al Clark is suffering from amnesia. His past, as well as his identity, has been ripped away. Today is day one.
The name Al Clark is adopted from a barely legible placard on the door of the room where he woke.
Who he was or what he did has been washed away with his memories, leaving one strong belief to survive the transition from past to present - his desire to do what was right. More
The man who calls himself Al Clark awoke on a deserted starship suffering from amnesia. His past has been erased as well as his identity. The name he adopts comes from a barely legible placard fastened to the door of the room where he woke.
The life changing event marks the beginning of a second life that will take him places he could not have imagined, manage feats he would not have thought possible, and teach him the true meaning of friendship.
Download: epub mobi (Kindle) pdf more Online Reader
lrf pdb txt
Price: Free! USD
Add to Library
Create Widget
Tags: scifi space opera free series first contact space ship colonization alien contact sciencefiction al clark
About Jonathan G. Meyer

I am a retired corporate electrician with a life-long passion for science fiction. As the middle child in a family with seven children, I spent a lot of time in books. SciFi has always been my favorite. Because of my love of reading, at the age of sixty I began to write the stories I have mulled over for years. Although writing is a process that requires dedication and patience, over the last several years I have managed to complete and publish a four book series (with a short-story prequel) titled AL CLARK, a SciFi Adventure named VINCENT, and a look back in time book I call - A CURIOUS ORB.

Reviews of Al Clark (Book One) by Jonathan G. Meyer

This is what I always wanted Sci-fi to be about, discovering and exploring new worlds. The science in this is not perfect, but it is certainly good enough for space opera. It would be better if we find out how the natives of the planet they discover got there from Olduvai gorge, but the 'dinosaurs' aren't so detailed that they couldn't be parallel evolution. The only violence in the book is between humans and dinosaurs, the only hint of sex is a young couple who get married and are expecting a child by the end.

Especial kudos for the fact that the people from Earth meet primitive natives and they treat them fairly!!! I'm not sure I ever saw that happen before. It has never happened in real life that I know of, at least western civilization has never encountered a primitive society that it treated fairly. I loved that so much it brought tears to my eyes. The ending is very uplifting and positive, the total opposite of so much violence and dystopia. Hurray! Hurray! Hurray!

There are a few plot twists I didn't see coming and a few hints of twists that never occurred. When the main character believes something because 'Robots can't lie' I thought for sure all the problems on the expedition were going to be traced to a mutiny by the robots. Didn't happen. A robot did malfunction, but it was a minor incident. There were a couple other spots like that, I won't spoil them.

The down side? There's a couple noticeable proofreading errors and the prose is occasionally a bit pedestrian. This may not push back the frontiers of literature but it is more than worth picking up.

You have subscribed to alerts for Jonathan G. Meyer.

You have been added to Jonathan G. Meyer's favorite list.

You can also sign-up to receive email notifications whenever Jonathan G. Meyer releases a new book.