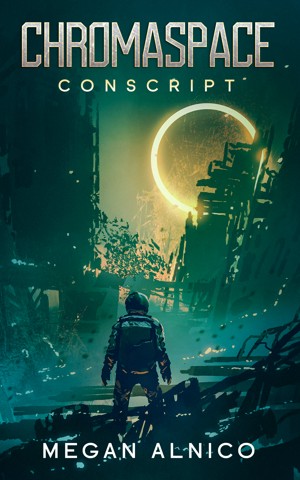 The Chromaspace Saga is an epic space opera set in a densely packed part of the galaxy where only a fraction of a light-year separates star systems. Here the nebula surrounding an embedded cluster of stars is so thick that space is never black, and starships fly against an illuminated backdrop. Part Expanse, part Avengers, Chromaspace is action-adventure, and irreverence rolled into one epic journey.
Available ebook formats: epub
Price: $6.99 USD
Buy Add to Library Give as a Gift
How gifting works
Create Widget
Tags: artificial intelligence space opera aliens space superhero mutants starship space action empire republic fleet starship
About Megan Alnico

Megan Alnico is a software engineer, sci-fi author, hobbyist luthier, RP junkie, improv comedy performer and the all-around paradox that is an extroverted nerd. She graduated from the Rochester Institute of Technology with a BS in Computer Science and a minor in live-action role-playing games and storytelling. Well, her minor was actually in Artificial Intelligence but spent significantly more time doing the former.

Megan spent her formative years in Connecticut but has since bounced from state to state on her own personal Oregon trail. She now lives in Portland and can be found enjoying the local comic book shops, computer recyclers, sushi restaurants, and improv comedy clubs.

For information about the Chromaspace Saga, or any of Megan’s books check out: chromaspace.net. You can follow her on twitter @The_Magnet_Girl or subscribe to her YouTube or Twitch channels for author readings, vlog updates, and special announcements.

You have subscribed to Smashwords Alerts new release notifications for Megan Alnico.

You have been added to Megan Alnico's favorite list.

You can also sign-up to receive email notifications whenever Megan Alnico releases a new book.