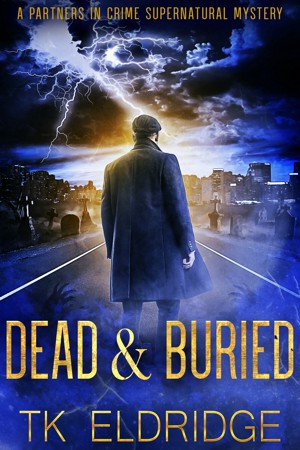 T.K. Eldridge retired from a career in Intelligence for the US Gov't to write. The experiences from then are now being used to feed the muse for paranormal romance, mysteries, supernatural, and urban fantasy stories. When they’re not writing, they are enjoying life in the Blue Ridge mountains of western North Carolina. Two dogs, a garden, a craft hobby and a love of Celtic Traditional music keep them from spending too much time at the computer.

About the Series: Partners in Crime Supernatural Mysteries

Detectives Kennedy & Donovan have been partners for eight years. Then one of them died - but they're still partners.
Check out Partners in Crime - a new supernatural mystery series by T.K. Eldridge.

Amazing book! A pair of partner detectives are the best the police department has, Kennedy and Donovan have solved many crimes and put away a lot of bad guys. Mike Donovan is murdered and Kennedy is determined to solve the crime and bring justice to Mike.

Lots of potential killers with all those they have put away, plus something isn't right at the police department with corruption there and higher up. Without his partner, Jamie Kennedy will have a harder time solving Mike's death, or will he. He soon leans that Mike isn't exactly dead and buried, his ghost is on hand to help solve his own death.

T. K. Eldridge really knows how to write a story that will grab you from page 1. His characters are well developed, the mystery is engaging and you won't want to put it down. Mike's ghost is perfect to help solve the mystery of his death.

(review of free book)
Jennifer Haslam reviewed on May 7, 2021

Absolutely loved it. Enthralling, and much better than the small blurb makes it to be. I'll definitley be looking for the rest of this series when they are released.

I happily recommend this to readers who enjoy detective fiction and/ or enjoy an engaging ghost story. The mystery attracted me and the process of investigation was satisfying, but the well developed, appealing main characters were what kept me reading all afternoon.
I also appreciate the professionalism of the writing style and editing.

You have subscribed to alerts for T.K. Eldridge.

You have been added to T.K. Eldridge's favorite list.

You can also sign-up to receive email notifications whenever T.K. Eldridge releases a new book.