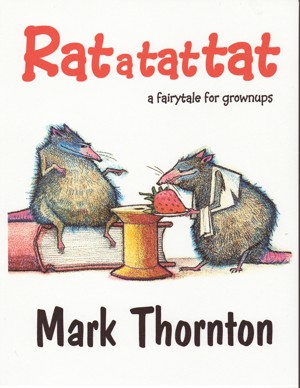 By Mark Thornton
A fairytale for grownups:
For the mouse Muse, the town has a million problems—each one is a rat. Tonight, they catch her, and she’s barely saved by a boy named Kirk.
But the whole town needs saving—the plague is spreading (a million rats, duh!). Kirk tries, only to find himself under attack by a different kind of rat.
Then an unseen power playing ethereal music intervenes.

Mark's Pied Piper Series has been in the making for 16 years. He released the first book, "Ratatattat," in the spring of 2010 and the second book, "HickoryDickoryDock," in November 2010. "Pay the Piper," the third and final book is scheduled for release in November of 2011.
Mark bought and developed Friday Mountain ranch outside Austin in the 1990's. Since then he has spent much of his time in Central America and the Caribbean. He currently lives outside Austin.

Act 3
The Author reads the beginning of Act 3.

You have subscribed to alerts for Mark Thornton.

You have been added to Mark Thornton's favorite list.

You can also sign-up to receive email notifications whenever Mark Thornton releases a new book.