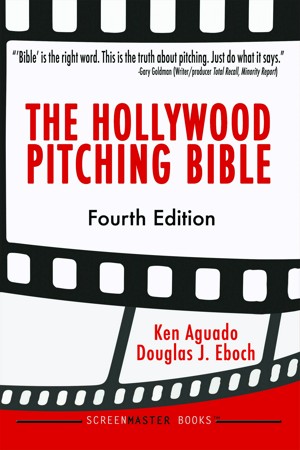 With decades of combined experience working in Hollywood as buyer, seller and teacher, the authors have created the definitive book that will demystify the pitching process, supported by a reasoned, logical point of view and supported by numerous specific examples.

If you want to work in the Hollywood creative community, you must know how to pitch. This book will show you how to succeed

“This book is therapy for anyone having trouble wrapping their head around the techniques of pitching. I only wish I had Doug and Ken's wisdom earlier in my career.”
-Eric Heisserer (Writer, Arrival, Lights Out, Hours)

“Ken Aguado and Doug Eboch are guys who walk the walk, and here they talk the talk. They know as well as anyone how to navigate the trickiest waters on the continent: Hollywood's pitching process. Demystifying the secrets of what works and what doesn't for the not-so-brave new world of corporate Movie Biz. It's on my top shelf of books I can't be without.”
-John Badham (Director of Saturday Night Fever, WarGames)

Douglas J. Eboch is a professional screenwriter and director who wrote the original screenplay for the movie “Sweet Home Alabama” starring Reese Witherspoon, which set a box office record for a September opening. Mr. Eboch also wrote the game “Nightmare Cove” and the children’s play “Sleepover at the Stables,” which has been performed hundreds of times around the U.S. The Scriptwriter’s Network awarded him the Carl Sautter Screenwriting Award for Best New Voice in Feature Films. He has a BA in Film Production and an MFA in Screenwriting from the University of Southern California. Mr. Eboch currently teaches screenwriting and pitching at Art Center College of Design and screenwriting workshops for the Singapore Media Academy. He writes the popular screenwriting blog Let's Schmooze.

Ken Aguado has been working in Hollywood for over 25 years as a studio executive, producer, author and screenwriter. His most recent films are "Miracle on 42nd Street" which had its PBS broadcast premiere in December 2018 and the theatrical film of "An Interview with God" (2018), which he wrote and produced. His other credits include "The Salton Sea" (Warner Bros), "Sexual Life" (Showtime), "Standing Up" (ARC) and many more. Ken is a frequent guest speaker at film schools and entertainment industry events around the world.

You have subscribed to alerts for Douglas Eboch.

You have been added to Douglas Eboch's favorite list.

You can also sign-up to receive email notifications whenever Douglas Eboch releases a new book.