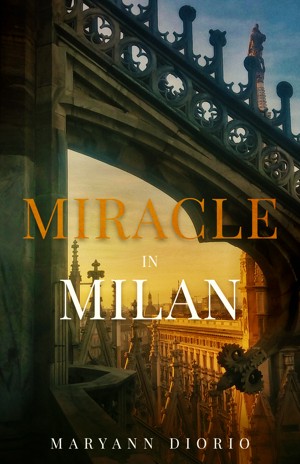 Amy Torelli, Chief Auditor for New York City-based Enson Pharmaceuticals, is assigned to audit the books of Enson's Italian branch in the enchanting city of Milan, Italy. Having made an inner vow never to trust a man again because of her father's betrayal, Amy finds herself falling in love with Enson Italia's American-born Vice-President, Ted McMasters. Will Ted be the one to cause her to break her inner vow?

Ted McMasters is on the run. A run from rejection. From himself. From God. Having been wounded by a father who made him feel worthless, and having been dumped by the woman he wanted to marry, Ted is determined to keep all women at bay. But will Amy be the reason he changes his mind?
Available ebook formats: epub
Price: $4.99 USD
Buy Add to Library Give as a Gift
How gifting works
Create Widget
Tags: forgiveness texas mafia new york city italy adultery christian embezzlement milan biblical worldview
About MaryAnn Diorio

Dr. MaryAnn Diorio is a widely published, award-winning author of fiction, non-fiction, and poetry. She writes riveting, compelling, page-turning fiction that deals with the deepest issues of the human heart. Her latest novel, MIRACLE IN MILAN, is about a young, female auditor who discovers convincing evidence that the man she loves is an embezzler.

MaryAnn's historical novel, IN BLACK AND WHITE, is a powerful love story between a white woman and a black man. It won first place in Historical Fiction in the 2020 Christian Indie Awards Contest. She has also written THE ITALIAN CHRONICLES Trilogy, including Book 1: THE MADONNA OF PISANO, Book 2: A SICILIAN FAREWELL, and Book 3: RETURN TO BELLA TERRA. Other works of fiction include: SURRENDER TO LOVE (TopNotch Press, 2015), and A CHRISTMAS HOMECOMING (Harbourlight Books, 2012-Winner of the Silver Medal in E-Book Fiction in the 2015 Illumination Book Awards Contest). MaryAnn is currently working on a novel on racism titled IN BLACK AND WHITE. It is scheduled for release in 2019.

MaryAnn has also authored nine picture books for children: POEMS FOR WEE ONES, THE DANDELION PATCH (winner of BEST BOOK OF JUVENILE FICTION in the 2017 Pinnacle Book Achievement Awards Contest), CANDLE LOVE, TOBY TOO SMALL, DO ANGELS RIDE PONIES? WHO IS JESUS? (Finalist in the National Indie Excellence Book Awards), A STUDENT’S GUIDE TO NATHANIEL HAWTHORNE, A STUDENT’S GUIDE TO HERMAN MELVILLE, and A STUDENT’S GUIDE TO MARK TWAIN, all published by TopNotch Press.

In addition to writing fiction, MaryAnn writes poetry. In POEMS FOR ALL SEASONS, a compilation of MaryAnn's poetry, she introduces a new poetic form she created called the "Diorion," named after her husband's family surname. This new form alone is worth the purchase price of the book.

MaryAnn is married to her awesome husband Dominic, a retired ER physician. They have two amazing adult daughters, a very smart son-in-law, and six rambunctious grandchildren. When not writing, MaryAnn loves to read, paint, and play the piano, mandolin, and guitar. She also loves to make up silly songs with her grandchildren.

Reviews of Miracle in Milan by MaryAnn Diorio

You have subscribed to alerts for MaryAnn Diorio.

You have been added to MaryAnn Diorio's favorite list.

You can also sign-up to receive email notifications whenever MaryAnn Diorio releases a new book.