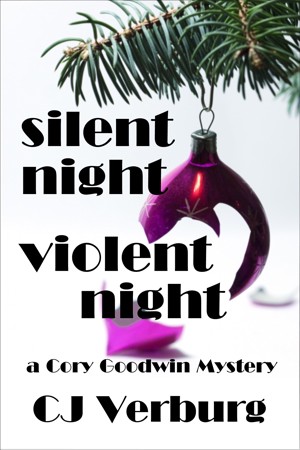 By CJ Verburg
In college they were rebel artists. Now Cory Goodwin's a Boston journalist, and Lilah Darnell Easton's a wealthy publisher's wife. Sniffing for a scoop at Bruce Easton's posh Christmas party, Cory uncovers frictions and rivalries among the guests which erupt into a string of nasty pranks. But when a blizzard traps everyone overnight, and the pranks turn fatal, it's up to Cory to stop the culprit. More
Cory Goodwin and Lilah Darnell were comrades-in-arts at Mount Holyoke College. Now Cory--the daughter of NY private detective Archie Goodwin--is a freelance journalist; and Lilah's the trophy wife of publisher Bruce Easton. At the Eastons' posh Connecticut Christmas party, Cory spots a scoop: famous biologist and soon-to-be author Henry Howrigan. According to the buzz in Boston, Henry's involved in a brewing conflict--but with whom? Does Olive Chute hope to lure him away from Harvard to Chute Labs? Is rising star Jeff Abels trying to edge him out? Is Bruce sleeping with Henry's editor, Melinda Doerr? Is Jeff sleeping with Bruce's secretary? Is it just coincidence the same guests were here last summer when Bruce's son drowned in the pond? A blizzard strands the party overnight--including gate-crasher Tony Cyr, Melinda's ex-husband and Bruce's ex-partner. They both insist Tony's behind the nasty practical jokes that have everyone desperate to get out of here. When the pranks escalate to murder, Cory has to decide if Tony is the ally he claims to be, or the killer.
Available ebook formats: epub mobi pdf lrf pdb txt html
First 15% Sample: epub mobi (Kindle) lrf more Online Reader
pdb
Price: $4.99 USD
Buy Add to Library Give as a Gift
How gifting works
Create Widget
Tags: journalist connecticut mystery suspense christmas present boston mystery christmas mystery new england mystery mount holyoke sleuth mystery series archie goodwin boston crime fiction cozy mystery amateur sleuth cozy mystery christmas cozy mystery woman sleuth harvard mystery ivy league mystery new england crime fiction publishing mystery seven sisters mystery cozy noir noir cozy rex stout
About CJ Verburg

CJ Verburg is an award-winning playwright and director and the author of best-selling books including 5 international anthologies (Bedford/St. Martin’s). She wrote her first prize-winning play at 16 and her second, a full-length rock musical, in 1968. As a Cape Codder for 15+ years, she helped found the Provincetown Playwrights’ Lab and headed theater companies in Provincetown, Bourne, and Cotuit. Meanwhile, as a freelance science editor and writer, she worked on projects from Powers of Ten (Scientific American Library) to Ghosts in the Mind’s Machine (Norton). Her multimedia memoir Edward Gorey Plays Cape Cod, and her Edgar Rowdey Cape Cod mystery series (starting with Croaked and Zapped), grew out of her long collaboration on theatrical and other adventures with her neighbor and friend, the artist and author Edward Gorey. Verburg’s plays include The Whistling Pig, Lady Day in Love, and Spin, or Twilight of the Bohemians (winner of the Ashland New Plays Festival). Her Cory Goodwin mystery series (starting with Silent Night Violent Night and Another Number for the Road) stars the international journalist daughter of Rex Stout’s NY private eye Archie Goodwin.

You have subscribed to alerts for CJ Verburg.

You have been added to CJ Verburg's favorite list.

You can also sign-up to receive email notifications whenever CJ Verburg releases a new book.