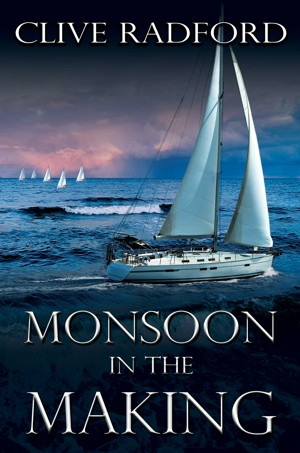 Monsoon in the Making

Monsoon in the Making - Suspense-thriller. Surprising and enlightening, with shades of dark and light drama. Glyn Sumner and his comrades have unexpected encounters in North Africa, profoundly affecting their futures. Tunis brings them bewildering confrontations for with Saleh, an Ethiopian suspected of terrorist involvement, and Chief of Police, Colonel Nassar. Off Sicily, Sumner & co witness an asylum seeker sea rescue by the coast guard, wondering if Saleh is aboard, or whether he is shaking hands with Neptune. Sumner ponders if the dark side also beckons them, visions of a European dystopia on the horizon.
Available ebook formats: epub
Price: $4.99 USD
Buy Add to Library Give as a Gift
How gifting works
Create Widget
Tags: fiction thriller suspense adventure action sailing surprising boating stimulating enlightening
About Clive Radford

His poetry has been published in numerous poetry magazines such as The Journal, The Cannon's Mouth, Poetry Monthly, Poetry Now, Storming Heaven, Poetry Nottingham, Scripsi and Modern Review, plus in many compilations by United Press.

'One Night in Tunisia', 'Zavrazin' and 'Bullet' have all been converted into three-act screenplays.

The 'Zavrazin' screenplay is under contract with Story Merchant/Atchity Productions for film production.

His work has a distinctive voice setting it apart and appealing to those fascinated by intrigue, and who question status quo accepted views.

Reviews of Monsoon in the Making by Clive Radford

You have subscribed to alerts for Clive Radford.

You have been added to Clive Radford's favorite list.

You can also sign-up to receive email notifications whenever Clive Radford releases a new book.