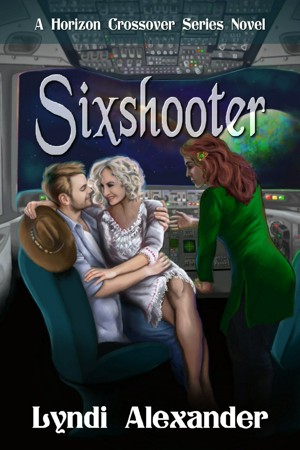 Lyndi Alexander always dreamed of faraway worlds and interesting alien contacts. She lives as a post-modern hippie in Asheville, North Carolina, a single mother of her last child of seven, a daughter on the autism spectrum, finding that every day feels a lot like first contact with a new species.

Reviews of Sixshooter by Lyndi Alexander

SIXSHOOTER is a sci-fi romance that really delivers! Valeni is a woman who is smart, passionate, and a capable spaceship captain. From shapeshifting aliens to a sexy space-age Earth cowboy, this story moves past with fascinating characters. If you like space adventure repleted with aliens and love triangles, then you'll love SIXSHOOTER!

SIXSHOOTER has everything you would want in a science fiction romance. The main character is Valeni, a tough-as-nails cargo spaceship captain. Her crew consists of a shapeshifting alien, who sometimes is seen as Nikki, a blonde female bombshell, and other times as Nik, a sexy hunk of a man. As Valeni and Nik/Nikki try to make a living in a rough corner of the galaxy, they meet Garrett, another Terran who has arrived in that region of space via a strange wormhole. While Garrett tries to figure out the mystery of Nik and Nikki and why he only sees one at a time and as Valeni struggles to deal with this new member of the crew, a job that smells a bit too good to be true falls their way. It seems every corner of the universe has its share of criminal elements, and now Valeni, Nik/Nikki, and Garrett must figure out how to make a living and not get caught up in more trouble. SIXSHOOTER has lots of spaceships, aliens, intrigue, moral dilemmas, and steamy relationships all told in fast-paced, sparkling prose. What more could you ask? I give SIXSHOOTER 5 of 5 stars. It's easily one of the best science fiction romances I've read in a very long time.

You have subscribed to alerts for Lyndi Alexander.

You have been added to Lyndi Alexander's favorite list.

You can also sign-up to receive email notifications whenever Lyndi Alexander releases a new book.