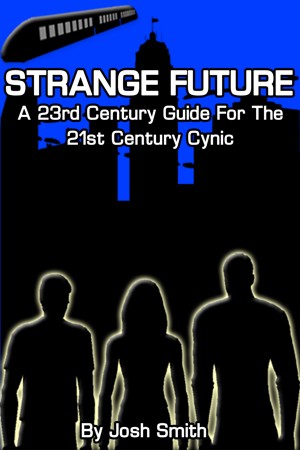 By Josh Smith
Rated 3.57/5 based on 7 reviews
Thomas Gordon's life was going just fine, until a chain of inexplicable mishaps results in Thomas getting fired. Fed up, he starts the search for a better life. Along the way, he meets a group of scientists with an intriguing escape route: human cryogenic preservation. Thomas and his 2 companions emerge in the 23rd century, and quickly discover it isn't exactly the "better world" they expected...
Download: epub mobi (Kindle) pdf more Online Reader
rtf lrf pdb txt
Price: Free! USD
Add to Library
Create Widget
Tags: science fiction
About Josh Smith

Josh Smith is a college student in Fort Wayne, Indiana majoring in Computer Science. He enjoys writing, programming, and generally being a nerd in his spare time. He is not on fire. In summary: Josh is just this guy, you know?

Reviews of Strange Future: A 23rd Century Guide for the 21st Century Cynic by Josh Smith

I'm giving this three stars because of the subject matter and not the execution of the story. It is a story about three people frozen in 2008 and revived in 2208 and their impressions of the future. Thruout the story they continually have a hard time with all the changes, though there are actually very few. There is a world government, just as dysfunctional as today, and some new technology, not as dysfunctional as today. The main point of the story is that nothing will really change and life will not really get better until human nature changes.

There is a token love interest in the story, and the idea that only love can make the world better. The affair is as chaste as any puritan could want. There is no violence at all, except for some wild animals. The proofreading and grammar is very good, but the narration is pretty amateur and the characters could use more depth.

Perhaps the biggest change in the technology is the PODS, which is very much a Star Trek style transporter, but not advanced enough to transmit anything to a location where there is no receiver device. It is a device that reads a person or thing's matter, converts it to data, and re-creates that person or thing at the receiving end. Besides the main issue with this device, handling of the soul, he has some other silly things going on with it. There is no explanation of what happens to the matter at the transmission end. There is no explanation of how new matter gets to the restoration machine at the receiving end. There is no mention of the fact that once the person or thing is reduced to data, any number of copies could be made. In the case of things being deleted from the data (in this case to remove weapons from luggage) the deleted objects are restored anyway, but in a different place. Now these problems are not unique to this story, the device as used on Star Trek is absolute fantasy, violating the laws of conservation of matter and energy right left and center, as well as having no way to capture and transmit the soul. With that said, primitive forms of this technology are not far off, we already have three-d printers which are a primitive version of the receiving device in this story. The real problems begin when we try that with living things. We need the equivalent of a three-d printer that can produce living things. If one could even print a single bacterium, the remaining problem is one of scaling up until you get to life forms that have a soul.

I applaud the fact that Josh realizes that there can be no improvement in human life as long as human nature does not change. That idea is the central theme of almost every story of mine. It is true that my version of the changes required are those necessary to make the world imagined by the hippies of the 1960's a reality and not necessarily those that would make human life best. We have little to no agreement on what would be best, but quite a bit of agreement that reducing violence and dominance would be a good thing.

A somewhat light and quick read (literarily speaking), Strange Future reads like an incessant, whining complaint about the world and everyone in it. This satire doesn't live up to it's name as most of what's presented is simply a replacement of current or emerging technology, not all of it better.
Plot wise, It suffers from a total lack of external conflict or compelling internal conflict.
On the plus side it's told with a coherent narrative, through believable characters. A couple jokes had me laughing out loud while others had me groaning quietly. Some of the proposed technologies are very interesting, but not always congruous with other techs, and a couple were just ludicrous.
I read it all the way through, and kept hoping something would happen...but nothing ever did.
Overall, I enjoyed this book, but sometimes I hated it (shooting stars) and believe that the author can probably do much better.

Although it's interesting enough to read from beginning to end, I would not read it again. It's hard to shake the feeling that this would be better labeled as pseudo-Futurama fan fiction. There are some formatting issues, but don't let that distract you, you may enjoy it.

I really enjoyed how well written this story was and that it had a consistant plot line. I liked the character development and the way the relationships between the main characters were handled and were realistic. I think the only thing that would have improved the story more would have been for the author to have included an antagonist or situation that the main characters needed to overcome. While enjoyable, the store was more more focused on how the characters reacted to what was happening to and around them.

EXCELLENT!!!! From start to finish!!! The author's concept of life 200yrs in the future was very believable and the character development throughout the book was also 'spot on' with how humans would react, put in that situation for REAL!! Will be buying a copy of this book for my personal collection!! Thanks Josh Smith.. Was an AWESOME story!!

A good, entertaining read; incorporating a universe of interesting ideas. It’s fascinating how the future is described in fiction depending on the author’s personal viewpoint, and their perception of who is deemed politically powerful at the time of writing. Although I realize most of this is satire, Josh has vividly drawn some aspects of a future world that is both believable and credible to even to an old Conservative like me. One minor note of criticism: I always cringe when I see a character in the future that is totally befuddled by events in the near or even distant past; i.e. Amazed that there was a time when there was no government control of reproduction (baby lottery). I think we should give future characters a little more credit. Good job, Josh! I hope to see more from you soon.

Some of the parallels between now and the future were quite funny ... especially when they went to 'International House' and discovered the IHOP !

(review of free book)
tinker reviewed on March 10, 2010
(no rating)
The epub version, at least, of this is unreadable due to poor formatting. The line spacing is to small, 0.13in. do people still use inches? I had to edit the css entries to double this value to stop the lines of text overlapping and while I was at it I removed the random page braks that Smashwords always adds and put in proper Chapter breaks.

As far as the story itself is concerned I have not yet read it so no rating is given yet. I have noticed while editing two errors. Buckingham Palace is not the home of the British Royal family, it is the official residence of the Monarch. The Queen lives mainly in Windsor Castle, other members of the Royal family live elsewhere. The other error, often made, is Big Ben, it is the nickname of the Great Bell and has only been seen by a handful of tourists, the clock tower of the Palace of Westminster is sometimes referred to as the tower of Big Ben.

You have subscribed to alerts for Josh Smith.

You have been added to Josh Smith's favorite list.

You can also sign-up to receive email notifications whenever Josh Smith releases a new book.