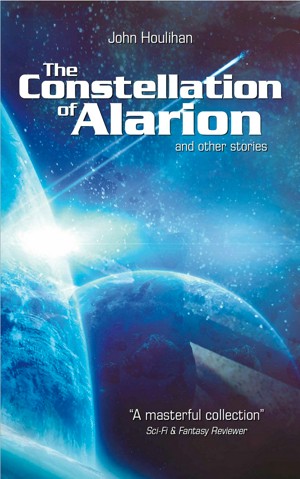 The Constellation of Alarion and Other Stories

• In Most Exalted, the hero of the seven systems now resides in retirement, but when a series of suspicious deaths rock his veterans’ home, will his dubious past catch finally up with him?

• In Charioteer, countries settle disputes the old fashioned way, trial by combat. As the eve of a great contest draws close, will Soola finally step out of her brother’s shadow and embrace her true destiny?

• In the Constellation of Alarion, a fabulous treasure lies hidden in the midst of a deadly labyrinth. Can three galaxy-hopping rogues overcome the maze’s lethal traps and their own bumbling inadequacies to claim it?

John Houlihan has been a writer, journalist and broadcaster for over twenty five years, working in news, sport and videogames. He has been employed by The Times, Sunday Times and Cricinfo and is the former Editor-in-Chief of Computer and Video Games.com. He currently works for Modiphius Entertainment as a narrative designer and editor, as well being a video game consultant and script writer.

His first novel was Tom or The Peepers’ and Voyeurs’ Handbook and he has also written The Trellborg Monstrosities, The Crystal Void, Tomb of the Aeons and Before the Flood in his Seraph Chronicles series (also collected in Tales of the White Witchman: Volume One). The Trellborg Monstrosities is also a game scenario for Call of Cthulhu and Savage Worlds which is published by Modiphius. He is also the writer of the Achtung! Cthulhu: Tactics videogame.

He has published The Cricket Dictionary, a modern guide to the words, phrases and sayings of the greatest of games and has also edited a collection of short stories called Dark Tales from the Secret War which is set in the Achtung! Cthulhu universe. Other work includes contributions to sci-fi anthologies like The Hotwells Horror & Other Stories and Flash - A Celebration of Short Fiction.

Away from the written word he has an unnatural fondness for cricket, football, snowboarding, cycling, music, playing guitar and all forms of sci-fi, fantasy and horror. He has an unnatural dread about writing about himself in the third person and currently lives in his home town of Watford in the UK, because, well frankly, someone has to.

You have subscribed to alerts for John Houlihan.

You have been added to John Houlihan's favorite list.

You can also sign-up to receive email notifications whenever John Houlihan releases a new book.