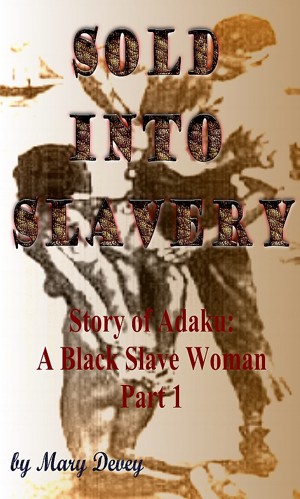 Sold into Slavery: The Story of Adaku, A Black Slave Woman Part I

By Mary Devey
The Story of Adaku discusses African slavery during the colonial times and highlights one young Igbo woman's plight as she journeys towards a world that means nothing to her. More
The Story of Adaku is intended to show the terrible turmoil and injustice that was done to a young pregnant woman who was kidnapped against her will and then forced into slavery by the very people of her own land. Nestled in her little village in inland Africa, this young pregnant mother of two boys already had the hopes and dreams which any Igbo woman her age would want of her time. And her joy was furthered with the impending birth of their third child, a child whom they were hoping would be the girl her husband wanted. But she was captured against her will and helpless at that point because of her pregnancy, she yielded to her assailants without question. What happens next is a terrible ordeal for this young woman who learns about the savagery of life's sharp ends and about where betrayals begin - on the very soil that is Africa. Along the way, Adaku meets people like her who were kidnapped against their will and soon she forges friendship with women across all tribes, all in search of a common cause to escape from the brutal trade and greed of certain nations of the coastal blacks and those of the northern African landscape who know nothing but of selling human flesh for the gratification of what the white men could offer them.

In Part I of The Story of Adaku, Adaku encounters treachery and hopelessness of being branded a slave. Already, she learns the dangers of running and in the early times of her capture, her determination for escape eventually materializes towards acceptance when she realizes the trade for human flesh is far too robust for one single person to fight.

I hope you find this story a beautiful one and one that will eventually spur you on towards the reading of my next story which covers Adaku's journey into The Middle Passage. This will be Part II.

Her first book "Sold into Slavery: The Story of Adaku" addresses the effects of African slavery and its consequence for one woman and the people who surround her. Highlighted in three parts, the first part addresses Adaku's life as a kidnapped woman sealed away from the rest of the African world in a place called a baracoon where she meets other kidnapped tribal women like her.

Part II on The Middle Passage will be available soon at Smashwords.com.

Mary has also recently completed Part I of her Wicca Trilogy which promises the most unusual - Rebirth: The Gathering of the Witches. Other books written include, "In Her Mama's Shoes" - a coming of age book that addresses the tragic consequences for a young girl who instead of looking onwards, turns the pages of time to only learn too much about her Mama.

You have subscribed to alerts for Mary Devey.

You have been added to Mary Devey's favorite list.

You can also sign-up to receive email notifications whenever Mary Devey releases a new book.