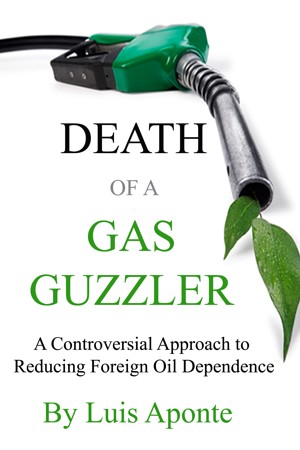 Death of a Gas Guzzler: A Controversial Approach to Reducing Foreign Oil Dependence

Luis Aponte is a Librarian who has taught technology courses to thousands of students at public libraries throughout Palm Beach County, Florida for over 8 years. His first eBook, titled "Death of a Gas Guzzler: A Controversial Approach to Reducing Foreign Oil Dependence" was self-published in 2011. He later produced and directed a short documentary film based on the eBook, where “Death of a Gas Guzzler” received "Official Entry" into the 2012 "15 Minutes of Fame International Film Festival" in Palm Bay, Florida.

Luis is a U.S. Air Force veteran; filmmaker; author; martial artist; a graduate of the University of South Florida in Library & Information Science; and a member of the American Library Association. Whenever Luis is not writing his next book, he enjoys acting in films and training with masters of Olympic-style Taekwondo.

D.O.A.G.G. eBook Trailer #2 - The Supercar Project
Here is the second video trailer my eBook, "Death of a Gas Guzzler". It highlights one of the chapters in my book that discusses the PNGV Supercar Project created during the Clinton Administration in 1993 - 2000, using $1.5 billion in taxpayer dollars. Enjoy the video! You can find me on www.DeathOfAGasGuzzler.com. I am presently seeking funding to turn my eBook into a documentary feature film.

Death of a Gas Guzzler short documentary film
Now that I am finished with submitting my film to film festivals, I thought I'd share my short documentary movie with all of you! Enjoy and share! Special thanks to Kathy McKenzie-Runk, award-winning author of The Mackenzie Scott Mystery Series, for sponsoring my short film! Thank you for believing in me and my project! You are an angel! :)

You have subscribed to alerts for Luis Aponte.

You have been added to Luis Aponte's favorite list.

You can also sign-up to receive email notifications whenever Luis Aponte releases a new book.