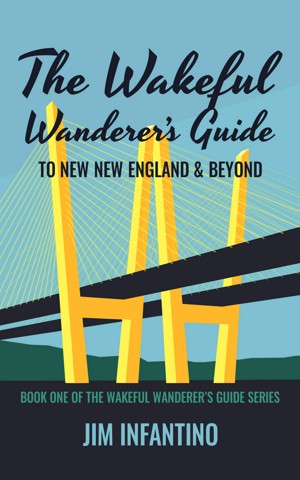 The Wakeful Wanderer's Guide to New New England & Beyond

Marto Boxter is an optimistic journalist with a head full of implants. When we meet him, he is planning a ride into the interconnected tribes of the Northeast from his town of Reverside-on-Hudson. He plans to document his ride by posting his thoughts in real-time to his post-human followers. Before he can leave on his tour however, a runaway named Helen arrives with secret information that throws Marto’s placid world into turmoil.

Meanwhile, Barnabas Yoniver IV, the leader of a Luddite town to the south launches a plot to disrupt the life of all upgraded humans and bring them back to the traditional economy of markets and governments. Aware of Yoniver's plans, rival Luddite families scheme to prevent Barnabas from grabbing too much power for himself.

This darkly humorous reflection of our changing world is an exploration of what it means to be human as our relationships with technology become increasingly intimate.
Available ebook formats: epub
You set the price! USD
Buy Add to Library Give as a Gift
How gifting works
Create Widget
Tags: speculative fiction postapocalyptic near future clifi postcapitalism climate fiction solarpunk
About Jim Infantino

Jim Infantino grew up in the Manhattan of the 70s and 80s. He studied Philosophy, moved to Boston to become a songwriter and busker. His songs have been featured on NPR’s Weekend Edition and All Things Considered. In 2011, after years of touring with his band, Jim’s Big Ego, Jim got the inspiration for a story too large to fit into a song and began writing his debut novel. He is currently working on the third book in the Wakeful Wanderer’s Guide series and a science fiction novelette.
When not writing, Jim runs a web design company, plays with his band, writes code, teaches meditation, reads to his daughters, and drinks a lot of coffee.

About the Series: The Wakeful Wanderer's Guide

Set at the end of the 21st century in New New England, Marto, Reyleena, Helen, Mem, and others fight to keep their Interconnected way of life alive against the forces of the NeoFeudal Traditionalist Luddites and the forces of the Memoriam.

You have subscribed to alerts for Jim Infantino.

You have been added to Jim Infantino's favorite list.

You can also sign-up to receive email notifications whenever Jim Infantino releases a new book.