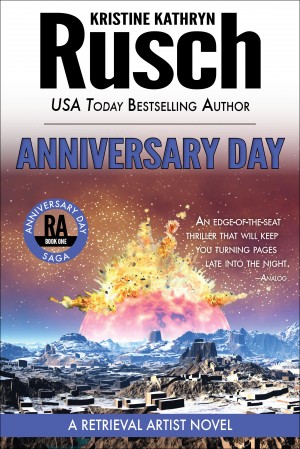 Four years ago, a bomb destroyed part of the dome protecting Armstrong, the largest city on the Moon. Now, as the city celebrates its survival with an event it calls Anniversary Day, a larger threat looms—one that begins with the murder of the mayor, and spreads across the Moon itself.

Even with every new technological device at her disposal, Moon Security Chief Noelle DeRicci can’t stay ahead of the unfolding disaster. As the situation gets worse, Retrieval Artist Miles Flint hurries to his daughter’s school to protect her. And Detective Bartholomew Nyquist finds himself in the middle of everything, from that first bombing to the Anniversary Day crisis itself.

Yet another fantastic book in the Retrieval Artist series.

Anyway, a bomb devastated one section of Armstrong on the Moon. Ms. Rusch takes us back to that day - talked about fairly briefly in a prior Retrieval Artist novel - to bring to light an event that was happening just as the bomb went off.

Det. Nyquist is trying to talk some sense into a woman with a knife, even as his back up, Det. Palmette, decides to come into the kitchen to see what's going on/what Nyquist is saying. The woman with the knife attacks Palmette, and then the bomb does its thing.

Everything goes to hell, with the lights going off, smoke and soot all around, and just a general not knowing where to go or what to do. Nyquist decides he has to save Palmette, since this is her first case, and it's well known he hasn't been too good with partners (others usually quitting or ending up dead), so he thinks it's time to actually do something good for one of his partners.

Flash forward many years, to the 4th anniversary of the bombing, and Nyquist is thinking that maybe he did the wrong thing. Seems Palmette is doing some strange, not so police-like things, although she's no longer a detective. She is, however, assigned to a position that decides on the disposition of abandoned ships that have sat in dock sometimes for decades.

Suffice to say that if attacks on some government officials were unleashed by those responsible for 9-11, how would we have felt? Devastated? Uncaring? This is a very long installment in the series, and while Flint and his daughter, Talia, have their time in this, I was most impressed with Nyquist, and now see him as a necessary character in the continuation of this series. He's tough, rugged, won't take crap from anyone, yet...he has a certain sensitivity with certain people.

Yes, as I stated above, Flint is there, all worried about his daughter, and when the attacks are at a fever pitch, DeRicci asks Flint and Talia to come help with some computer stuff, as her own assistant is freaking out (due to some behind-the-scenes carryings on with her assistant and a government official), and can't do her job.

But it's Nyquist who's the star in this one, and fittingly, he has the last say in this book, as he digs into Palmette's background, wondering why the police overlooked certain things in that background...

Stellar story. Easily the best in the series so far.