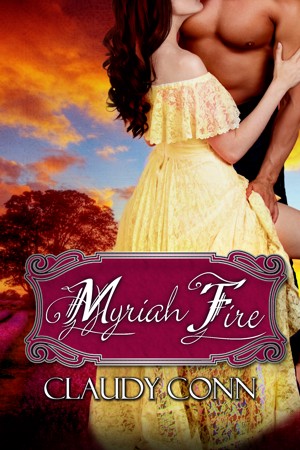 Rated 5.00/5 based on 6 reviews
Myriah meets Kit under the worst circumstances and their meeting was an explosion of wills, and actions, and it was what finally set Myriah on fire… More
It started with a stolen kiss …
Fiery Myriah Whitney is wild of nature, contrary, and independent. But when her father catches her kissing the handsome Sir Roland (how else is she to determine if he is the one who will make her feel thunder and lightning, hear bells and music?), he declares that her days of headstrong independence are over. She will, he commands, announce her engagement to Sir Roland—immediately.

But in an age where marriages are about alliances rather than affection, practicality not passion, Myriah wants more—she wants to fall in love. And she does not love Sir Roland. So she runs away to her grandfather with her faithful manservant, Tabson, at her side.

A wrong turn in the fog, however, leads to the discovery of an injured young man, and before she knows it Myriah is caught up in world of intrigue and secrets. And when she meets the young man’s older brother, the mysterious Lord Kit Wimborne, the sparks fly. Their first encounter—in his bed, both of them naked, no less!—is an explosion of wills, and it is what finally set Myriah on fire.

What a fantastic story, and quite a shocking unexpected ending! Loved it! Couldn't stop reading until I saw the words "The End" :)

Another great story from Ms. Conn. Myriah is high-spirited, impulsive and passionate. Kit is her perfect compliment and sexy to boot.

Myriah Fire by Claudy Conn
Myriah Whitney is a headstrong young woman heading into her third Season. She has had plenty of offers for marriage but she wants love. Her father is done doting on her though and either she chooses to marry or he’ll do the choosing. And when he does there is only one thing left for Myriah to do….run off to Grandpapa’s. With Tabby, her groom, along with her they get lost in a mist and she finds herself on a whole new adventure.

Christopher “Kit” Wimborne, sixth Viscount of Wimborne Towers comes home one night to find a woman in his bed. What could he do but join her? He quickly finds out she is not what he thought. Not some doxy his brother brought home at all. Yet there is something this fiery haired beauty is hiding from him and Kit is determined to find out what it is. Even while he has his own secrets to hide.

Claudy Conn sends the readers on quite the adventure in Myriah Fire. Every turn of the page shows that things are not always as they seem to be. And this heiress is definitely much more than a spoiled girl of the ton not willing to get her hands dirty.
**Sexual situations and language
http://justjudysjumbles.blogspot.com/2012/07/Claudy-Conn-Book-List.html

Another brilliant romance by Claudy. Everything she write blows me away... Just had to add that. And the cover isn't it just pretty?

Myriah is the female main character of this story. She, like other females in the time, puts up with the views of females in this time. Her fiery character was enough to pull me in and her loyal sidekick Tabson made quite a pair. We have Kit. The male character of the story with his dark, or not so dark secret. Together the characters create a drama worth reading. Kit doesn’t quite trust her for most of the book and Myriah just tries to do what’s right.
One of the things about reading historical books is the details used for description and placing things. Details like that are good for history nuts and freaks, like I. (Not a complete history buff.)
The story is a charming romance that makes you want everything to work out. The surprising ending will not be anything you see coming. Hints although are everywhere, both misleading and guiding. It was a excellent way to add a twist to the story.
What I’m saying basically is to go get a copy and check it out. If you’ve read Claudy Conn’s other books then you’ll love this one, and if you haven’t... Go check it out and be pulled into her world of writing. (Brainwashing Complete.)

What was once an innocent, if rollicking, regency romance has exploded with passion as Claudy Conn revisits Myriah Fire to turn up the heat.

No mewing coquette she, Myriah Whitney refuses to settle nicely into marriage as prescribed by the haut ton of British society. Born into wealth and privilege with both beauty and brains, Myriah is willfully holding out for a love match. Unfortunately, Myriah gets caught in what appears to be an amorous kiss with the eligible Sir Roland and rather than create a scene or acquiesce to a loveless marriage, Myriah chooses to slip away before an engagement can be announced.

The road Myriah takes from London turns out to be one of high adventure, when she comes across a young nobleman, bleeding to death with a bullet in his side. Myriah manages to get the youth safely to his manor and in the absence of servants tends his wounds. As innocent as she may be, Myriah quickly finds herself in yet another compromising position, when she wakes in the silken embrace of Lord Kit Winborne, the youth's older brother. Being mistaken for a bit-of-muslin might have proven devastating for a lesser soul, but this miss is anything but daunted. She rises from the encounter with dignity intact and proceeds to win the good Lord's heart.

Myriah may feel an instant attraction for Kit, but she already has suspicions that all is not well on the Winborne estate. Most of the servants are gone, the grounds have become overgrown, and then there is the mystery of how young William Winborne came by his bullet wound. The Winbornes seem to have fallen on hard times. Something dark and sinister hangs over their dealings and Myriah finds herself caught in the thick of it, unable to reveal her true identity, yet unwilling to return home and face her father's ire.

In order for true love to blossom and take root there is a price to be paid in honesty and trust, something neither Kit or Myriah can afford to give each other blindly. The passion and desire they feel only serves to confuse matters further as neither Myriah nor Kit can risk honesty, when more than their personal happiness stands to be lost. Matters become complicated further when Sir Roland discovers Myriah's whereabouts.

The addition of unbridled sexual passion to Myriah Fire's strong story brings dimensions of maturity and depth to the struggles faced by Myriah and Kit, without diminishing any of the innocence, joy or charm found in the original story. This revised version of Myriah Fire allows Claudy's regency followers to appreciate what her paranormal romance fans have discovered –mind bending eroticism.

A truly captivating tale with a blast of added sizzle, Myriah Fire will kindle the flames of your heart and burn up the night.