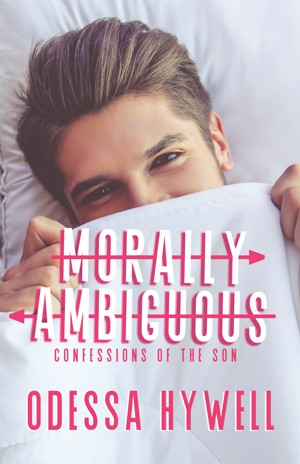 Morally Ambiguous: Confessions of the Son [1]

Rated 4.88/5 based on 17 reviews
Confessions of The Son, a 20K short story, is part one of a two-part series featuring a taboo relationship between a loving father and his needy son, explosive secrets and a dash of hurt|comfort. This short story can be read as a stand-alone but is best enjoyed in conjunction with Transgressions of The Father. More
Two men bound by their shared past face an unknown future.

Atwood struggled and sacrificed but, finally, he has everything he could ever want or need. Except for the one thing he can’t have—the son he gave up for adoption. Then Eren, seventeen years his junior, homeless and in desperate need of a safe place, arrives on his doorstep with a secret that could destroy the tentative relationship they’re building. No one is guaranteed a happily ever after. Sometimes, the things you desire can destroy you. Is the risk worth the reward? Or does a stray strand of DNA spell doom for Atwood and Eren?

Odessa is a dark MM romance author who decided because she is married to a twin it was best NOT to publish her books featuring twincest and other questionable themes under her married name as her husband would not approve.

If you know who Odessa Hywell is, don’t be a snitch. Like Benjamin Franklin said, “Three may keep a secret, if two of them are dead.”

About the Series: Morally Ambiguous

Morally Ambiguous is a duet featuring a taboo relationship between a loving father and his needy son with a praise kink, explosive secrets, a dash of hurt|comfort, an all male, clothing optional resort, old friends, a jealous ex-boyfriend and graphic depictions of public sex.

Reviews of Morally Ambiguous: Confessions of the Son [1] by Odessa Hywell

Good beginning to this duet. Full of angst and heat. Author makes you care about the characters and you can feel the chemistry coming off the page!

This was an awesome read. Not gonna lie, it was a bit angsty for me but the writing was so well done that I was able to hang in there.

There is no spoiling what this book is about, a son goes to find his Dad and things happen. And these things that happen are happening organically. So totally believable that I was cheering for a HEA for them.

I did not like the portrayal of the birth mother, but it does explain how Dad became a Dad to begin with.

this was wonderful! I love how Atwood took care of Eren and how their relationship grew closer. I was so touched by how Atwood celebrated Eren's birthday every year and so glad he had a good life before they met as adults.

(reviewed the day of purchase)
Deborah Howe reviewed on Nov. 3, 2021

This was handled fairly well, there were some really thought out, poignant points that were made. I’m glad there’s a second part because this wasn’t nearly enough

Not that it’s not worthwhile or super kind of him but Atwood is cracking me up with his concern for allergens. He’s like the busiest helicopter mom at the playground.

So, I’m a big fan of consent. Like as long as you get consent the world is your oyster be it degradation, physical abuse, rape … cool. And even though I can let those lines blur occasionally into the world of dub-con and even more rarely non-con … this is fucked up of Eren.

There is something to be said about sex with older men, they tend to know a thing or two and are a cut above the rest … just saying.

It also helps that Atwood is apparently very flexible.

Pretty heartbreaking when the reality of the situation comes to slap you in the face. It wasn’t just a one night stand situation, there was real affection, not just animalistic passion that led to what they did.

Dammit Eren, he guts me. He’s far too sweet and fragile for this world.

“Nothing fired people up like Jesus and Thin Mints.”

“You did so well, Eren—so good for me. I’m so proud of you for telling me what you wanted, letting me give you what you needed. Such a good boy.”-🌶🔥🥵

“It’s not like you’re going to accidentally get me pregnant so who would it really hurt?”-Right?! I think this every time it’s an MM taboo

This story was just so good from start to finish. Even if the ending left me knowing that there would be a second book to tie this off perfectly. This was my first father/son taboo book and it was everything that I never knew I needed. Eren and Atwood had such an amazing dynamic between them from the start that you couldn’t help but root for them. The way that Eren pines for Atwood regardless of everything made you just want him to have his happy ending. And the care that Atwood showed for Eren as well as the restraint that he showed toward the end was just a glimpse into what a good man he was through and through. You wanted them to have each other because they deserved each other. And when they came together, it was perfect. So hot and so dirty. I can’t wait for the second book.

I got this book after reading Twisted Together. It was a GREAT read. Very well written and definitely kept me interested in the story.

Loved this first book in a (now completed) duet.
I loved that although this story is about an incestuous relationship between a biological father and son, the author has made the tale very authentic. This is not smut. This is, in fact a really deeply profound tale.
This book is sooo well written and the author has managed to capture all the emotion and angst that might occur if this was real life.
Smooth, quick reading which had my attention from the first line to the last.
Very well done!
°although the description states this can be a standalone, it does end on a cliffy-like note which urges the reader to snatch up the sequel with no holds barred! You will absolutely WANT to follow through to see how the story concludes.
Five stars!
Highly recommended!

Atwood and Eren's story was so sweet and hot. If you want the squirmy butterfly feels from reading a relationship that you know should be uncomfortable because it is so wrong but just works then Morally Ambiguous: Confessions of the Son hits the spot. Eren surprises birth dad Atwood and they struggle to make a new relationship while fighting feelings they know they shouldn't have. I can't wait for book two and more from this author.

You have subscribed to Smashwords Alerts new release notifications for Odessa Hywell.

You have been added to Odessa Hywell's favorite list.

You can also sign-up to receive email notifications whenever Odessa Hywell releases a new book.