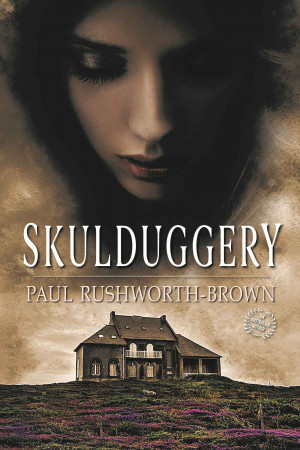 An exciting, mysterious, fictional and historically accurate adventure pulls no punches about the life and hardships of peasant farmers living on the moors of Yorkshire in 1590. A time when life expectancy was thirty-five, children rarely lived past the age of six and ale was consumed liberally because the water was undrinkable. More
The bleak Pennine moors of Yorkshire is a beautiful, harsh place close to the sky, rugged and rough, no boundaries 'cept the horizon, which, in some places, went on forever. Green pastures and wayward hills are in the colours of ochre, brown, and pink in the spring. Green squares divided the land on one side of the lane and on the other. Sheep with thick wool and dark snout dotted the hills and dales. One-room cruck house cottages are scattered, smoke billowing out of some and not others. Dry stonewalls are dividing and falling, a patchwork of green, green, and more green. Long grasses whispered while swaying in the chilled wind, waiting for the summer months. The story, set on the moors of West Yorkshire, follows wee Thomas and his family shortly after losing his father to consumption. Times were tough in 1590, and there were shenanigans and skulduggery committed by locals and outsiders alike. Queen Bess has died, and King James sits on the throne of England and Scotland. Thomas Rushworth is now the man of the house, being the older of the two boys. He is set to marry Agnes in an arranged marriage, but a love story develops between them. This rollicking adventure paints a descriptive picture of the characters and the landscape they fill. You are kept in suspense till the final pages where one hopes good will triumph over evil.
Available ebook formats: epub mobi pdf lrf pdb txt html
First 20% Sample: epub mobi (Kindle) lrf more Online Reader
pdb
Price: $6.99 USD
Buy Add to Library Give as a Gift
How gifting works
Create Widget
Tags: history yorkshire feudal moors life history history 1600s yorkshire post west yorkshire rushworth
About Paul Rushworth-Brown

Paul Rushworth-Brown was born in Maidstone, Kent, England in 1962. He spent time in a foster home in Manchester before emigrating to Canada with his mother in 1972. He spent his teenage years living and going to school in Toronto, Ontario where he also played professional soccer in the Canadian National Soccer League. In 1982, he emigrated to Australia to spend time with his father, Jimmy Brown who had moved there from Yorkshire in the mid-fifties.

​Paul was educated at Charles Sturt University in New South Wales, Australia. He became a writer in 2015 when he embarked on a six-month project to produce a written family history for his children, Rachael, Christopher and Hayley.

​This four hundred page book traced his family's ancestry back to Haworth, Yorkshire where his ancestors had been living as copyholders or peasant farmers since 1590. His Great Grandfather James Rushworth Ist was a carpenter and the first to move away from the dales in the mid-1800s with his wife and nine children. Through this research, he developed a passion for writing and Skulduggery, Winter of Red and the soon to be released Dream of Courage is a continuation on from this.

'The history of these people is rarely thought of and even less rarely written about because there are few records as most would have been illiterate. There is much written about the lords and ladies but what about the common people.

Having the ability to research and describe what life may have been like gives my readers the ability to step back in time. It was important for me to describe in detail the day to day hardships and adventures and not sanitise the story for the modern literary world. Most importantly, I wanted to use a simplified Yorkshire dialect which at times is not easy to read, but adds to the realism and tone of the story when one becomes 'fluent'.'

​Exciting, mysterious and historically accurate adventures pull no punches about the life and hardships of 'copyholders' living on the moors of Yorkshire in 1590. A time when life expectancy was thirty-five, children rarely lived past the age of six and ale was consumed liberally because the water was undrinkable.

​Reading Paul's novels, you will walk the moors of Yorkshire and try a jack of ale at the Kings Arms; you will laugh, cry and feel empathy for young Thomas Rushworth and his descendants who face the rigours of life living as copyholders on Lord Birkhead’s land at Hall Green. An area Paul Has visited many times to do research for his novels.

​Rat baiting, shenanigans, murder, deception and love will keep you enthralled right until the end, but be forewarned as the author paints a realistic, picture which quite easily places you amidst the tale. So, turn the page now and step back in time, to a period in history which seems simpler, but one in which hardship, survival, death and skulduggery were a daily occurrence in the lives of the people of West Riding.

​Paul is currently writing the third novel in the Skulduggery series called Dream of Courage which is set in the time when England was a republic under the reign of the Puritan, Oliver Cromwell. Witch-hunting, illegal wool broggers, the Halifax Gibbet, the ducking pond and a nasty little man by the name of Milton Killsin will keep the reader spellbound.

Reviews of Skulduggery by Paul Rushworth-Brown

You have subscribed to Smashwords Alerts new release notifications for Paul Rushworth-Brown.

You have been added to Paul Rushworth-Brown's favorite list.

You can also sign-up to receive email notifications whenever Paul Rushworth-Brown releases a new book.