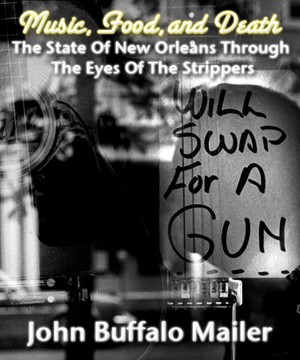 Music, Food, and Death (The State Of New Orleans Through The Eyes Of The Strippers)

By John Buffalo Mailer
Rated 5.00/5 based on 2 reviews
If you want to know how any city is doing, go ask the waiters, the busboys, the bartenders, the doormen, and the strippers. The service industry has its finger on the pulse like no other.

John Buffalo Mailer founded Back House Productions in New York City with three other Wesleyan grads in October of 2000. Within one year Back House became the resident theater company of The Drama Bookshop’s Arthur Seelan Theater, and have developed, among many plays, the 2008 TONY winner for Best Musical, In The Heights.
In 2001, John’s first play, Hello Herman, had its New York Premiere at the Grove Street Playhouse and recently had its West Coast Premiere at the Edgemar Center for the Arts in Los Angeles with John in the lead role. The feature film is currently in development and Dramatists Play Services is publishing the play in the Spring. John’s second play, Crazy Eyes, had its world premiere in Athens, Greece in 2005, and the US Premiere in Provincetown, Mass later that same year.
In 2003, John took the position of Executive Editor for High Times magazine. While there, he became active in the protest movement centering around the Republican National Convention. In addition to the “High Times Activist’s Guide to the RNC”, he also interviewed his father, Norman Mailer, for New York Magazine, on the possible dangers and benefits of the protest. That interview was later included in a book of discussions between father and son on topics ranging from Protest to Poker and everything in between, titled The Big Empty (Nation Books, February ‘06).
In 2008, in partnership with his brother, Michael Mailer, he produced the documentary adaptation of Naomi Wolf’s best selling book, The End Of America.
John is a member of The Dramatists’ Guild, Actor’s Equity Association, SAG and The Actors Studio. He can currently be seen as Robby, an Options trader and the best friend of Shia Labeouf’s character Jake Moore in Oliver Stone’s upcoming Wall Street 2: Money Never Sleeps.
John has lectured at the University of Notre Dame, Wesleyan, the University of Athens, Syracuse University, The New York Society for Ethical Culture, The Dorothy Chandler Pavilion in Los Angeles, Long Island University and has appeared on Hannity and Combs, Air America, Democracy Now, WNYC, and CSPAN’s Book TV. John has freelanced for Playboy, New York Magazine, Provincetown Arts, Lid Magazine, Stop Smiling, Corriera De La Sera, The Norman Mailer Review, ESPN Books and The American Conservative.

Reviews of Music, Food, and Death (The State Of New Orleans Through The Eyes Of The Strippers) by John Buffalo Mailer

Mailer provides the reader with an uncensored look at a population rocked back onto their heels by catastrophe, and at times the reader almost wishes the work was fiction. The realities news coverage revealed during Katrina were difficult for outsiders to accept, and the portrayal of life in the Big Easy post-Katrina will be no easier. Mailer acknowledges the lives beyond the tourist brochures and concierge recommendation, and offers a glimpse at a dark but honest reality of life in the big city after tragedy.

Author John Buffalo Mailer (son of Norman Mailer) was once commissioned by Playboy to write an article about post-Katrina New Orleans. Numerous editorial policy changes ensued, and the article eventually reverted to him.

Mailer chose to publish this gritty look at New Orleans exclusively as an eBook, and I feel privileged to have read it. His prose is evocative, and the interviews with the strippers and bartenders show the gritty underbelly of a city that is still trying to recover from disaster.

I will say that this book is not for the faint of heart. There are discussions of murders, sex, prostitution and drug use. Mailer pulls no punches in showing the darker side of recovery in a devastated city.

A short read, and well worth exploring.

You have subscribed to alerts for John Buffalo Mailer.

You have been added to John Buffalo Mailer's favorite list.

You can also sign-up to receive email notifications whenever John Buffalo Mailer releases a new book.