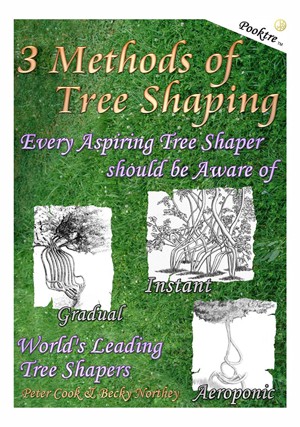 By Becky Northey and Peter Cook
This book was written by world leading tree shapers Peter Cook and Becky Northey. They discuss the different published methods of tree shaping. Each method has a description of how it is done, with images of the resulting chairs. The authors also give their views as to the pros and cons of each method. This is a well thought out and researched book on the different methods of tree shaping. More
3 Methods of Tree shaping was written by world leading tree shapers Peter Cook and Becky Northey. Tree shaping is an art form where fantasy can become reality. This is achieved by shaping the trunk of the tree into ornate or useful items. The most common form that has been shaped is the tree chair. Some trees have been trained into the form of a stool ready for harvest where as other trees have been shaped into chairs that are to remain living. This is a new emerging art field, with only approximately 17 practitioners at this time, three of whom are dead.

Peter Cook and Becky Northey were invited to be the featured artists at the 2005 World Expo in Japan, where they were acknowledged as the world leaders in this art form. As founders of Pooktre: a new way of viewing trees, they are internationally known artists, giving presentations, teaching individuals as well consulting with the Queensland government. In addition to this, life size photos of their trees have been exhibited internationally and since Pooktre made its debut at 2005 Expo there has been worldwide media attention of their trees, Ripley’s Believe It or Not, Natural history Museum South Africa, Wired UK Magazine, London Financial Times, Society Interiors Magazine (India), Australian National TV, appeared in multiple Japanese T.V. programs, Newspaper Culture (China) and including significant internet exposure and that interest has continued to grow.
They were the first in the world to create people trees, which are representational as opposed to abstract or functional art. They were also the first to use inclusions with trees that resulted in functional art pieces, such as a growing garden table, harvested coffee table, mirrors, and even a gem stone neck piece. With a combined 41 years of real-world experience, they have developed the tree shaping process of Pooktre.
Together they have mastered the art of tree shaping. Pooktre has perfected a gradual shaping method, which is the shaping of trees as they grow along with predetermined designs. While this method takes time to mature, it is a gentle way to shape the trees. With a deep understanding of tree lore, they move in harmony with the trees. They live in the mountains surrounded by thousands of acres of a wild landscape. They love teaching their children about the animals that share their home and swimming in their pristine mountain stream that flows pass their garden.

You have subscribed to alerts for Becky Northey and Peter Cook.

Would you like to favorite Becky Northey and Peter Cook?

You have been added to Becky Northey and Peter Cook's favorite list.

You can also sign-up to receive email notifications whenever Becky Northey and Peter Cook releases a new book.