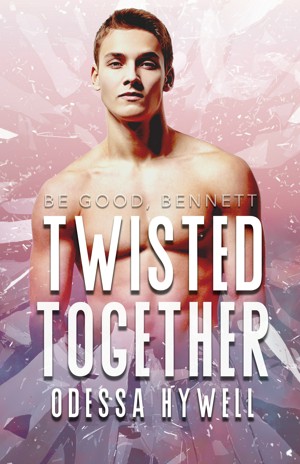 Rated 4.80/5 based on 20 reviews
Twisted Together is a taboo mm romance of 40K words featuring a sexual relationship between twin brothers of dubious (as well as some non-) consent, and light bondage with a guaranteed HEA. Also includes a size difference, sweet cuddles, and plenty of fluff to keep you afloat in these dark times. More
It starts as a violent encounter in a nightclub bathroom but quickly spirals into something else entirely as Bennett Osgood becomes trapped in an endless cycle of give and take. In the dark, bound by more than his desire, there is no escape from his relentless captor. His only option is to lie—to everyone, including himself.

When things begin to unravel and the truth about his stranger comes to light Bennett finally has to decide: is love worth risking everything?

Odessa is a dark MM romance author who decided because she is married to a twin it was best NOT to publish her books featuring twincest and other questionable themes under her married name as her husband would not approve.

If you know who Odessa Hywell is, don’t be a snitch. Like Benjamin Franklin said, “Three may keep a secret, if two of them are dead.”

Reviews of Twisted Together by Odessa Hywell

Sexy, surprising, with just enough pain. It is a taboo book but very well done! A fun quick read 10/10 would and do recommend

I really loved this book. The dark manipulative edge to the relationship works really well. It is twincest so it is hardcore taboo and questionable things happen in it but I enjoy these kinds of reads and recommend it anyone who likes the same genre. The writing and plot of the story really gives it an edge to other taboos I’ve read. Give it a go.

This is definitely not for everyone. It's taboo (twincest) and dark, not only because of the non-con/dubcon, but also because there's some psychological manipulation from one of the MC. But if you go in with the right expectations and a healthy dose of suspension of disbelief, the OTT premise becomes kind of fun, actually! It's messed up, but also, kind of silly? I don't know exactly, but I loved it. The prose is good, the codependant dynamics between the twins was lovely, and the sex scenes were pretty hot. I would definitely recommend this to anyone who's OK with the above themes!

This was a wonderfully twisty, dark, hot read. Poor Bennett, going from not knowing whats going on to suspecting but hiding, to finding out. I loved the codependency of Bennett and Cooper. All around a great read.

I LOVED this! It was twisted, it was steamy and it kept me hooked from start to finish. When I say steamy I mean 100% not-safe-for-work, will-melt-your-kindle hot! Definitely recommend it and I only wish there was more!

This was one of the best written *cest stories I have read in a long time.

Even with the fact that Bennett was teetering on the TSTL fence for so long, I was really emotionally invested in the mc and his brother Cooper. I will point out that these brothers did not have a healthy relationship even before all this happens. They were too dependant upon each other and for some reason, one was allowed to go out and have boyfriends but the other one wasn't. I know we were supposed to think that it was because Bennett really wanted his brother so didnt bother to go out, but it really didnt feel that way to me. There was a major size difference, which was different because most twins are identical in these stories, which I enjoyed as well.

Twisted Together by Odessa Hywell
3 🌟 🌟🌟 (Verified Purchase)
Firstly, my 3-star rating has nothing whatsoever to do with the author's excellent writing.
This book is virtually typo free and exceptionally well edited (That's definitely a plus from me) albeit a tad repetitive at times. For example : far too many kisses on the temple. To the point it becomes annoying and stops being "Aww how sweet". (of the 27 times his temple is mentioned, 18 were Temple kisses).

Basically, I just didn't gel with the constant, consistent and continuous lack of, or dubious consent in this story. After several instances, I found myself intensely disliking Cooper (yes we know right from the start who "the stranger" is).
Then, we have Bennett. Could any character (in any book ever) be so dense. The two brothers are obviously as thick as thieves, and always have been. How could he possibly have been in any doubt?
He "knows" that voice but can't place it? He would know his brother well enough to recognize his scent, his touch, the feel of his embrace. But poor Bennett doesn't have a clue. Not likely! Cooper knows how this scenario is messing with his brother's mind, and traumatizing him, but he continues to lie and hurt him mentally (not to mention physically). What manner of Love is that?
I'm sorry, there is just so much wrong with this story, I was glad to finally reach the end.
I was bitterly disappointed when the truth was revealed and I had hoped that Bennett would leave and never come back. This issue (conflict) was far too easily resolved and forgiven... Of course, after once again being forced by Cooper.
Too much. Far, far too much.

* I have already read (prior to this one) and rated 5 stars, the author's following duet, which I loved!

This was both a hot read and surprisingly emotional! I came into it expecting it to be an erotica read and nothing more, but caught myself staying up reading and even crying when Bennett was feeling at his lowest. I won’t go on tons and tons about this because honestly, if you’re alright with the above topics, just read it.

Odessa Hywell’s writing is superb. I’m scared to read her next series because then I’ll have nothing else to read! I hope she continues to write more and more because it flows so nicely.

You have subscribed to Smashwords Alerts new release notifications for Odessa Hywell.

You have been added to Odessa Hywell's favorite list.

You can also sign-up to receive email notifications whenever Odessa Hywell releases a new book.