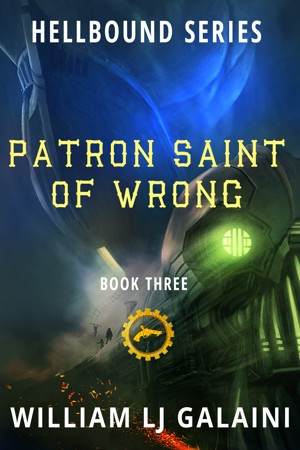 Yitz, determined to rescue his wife Adina from her captors, finds himself in the precarious position of both leader and savior—not just for his love, but for all of New Dis. Leading a motley crew of misfits, the troubled and timid husband delves into Aztec horrors and mechanized war machines to befriend demons and forge alliances. He must not only save the future of New Dis, but hold his Adina once more.
~~~
EVOLVED PUBLISHING PRESENTS a tale set in an industrialized Dante's Inferno with steampunk trappings, in the third book of the "Hellbound" series of religious sci-fi/fantasy adventures. [DRM-Free]
~~~
BOOKS BY WILLIAM LJ GALAINI:
> “Trampling in the Land of Woe” (Hellbound – 1)
> “Sparks from a Cruel Grindstone” (Hellbound – 2)
> “Patron Saint of Wrong” (Hellbound – 3)
> “An End to Ice and Sorrow” (Hellbound – 4)
> “Beneath the Titan’s Stride” (Hellbound – 5)
~~~
MORE GREAT RELIGIOUS SCI-FI & FANTASY FROM EVOLVED PUBLISHING:
> The “A Nephilim Thriller” Series by Jeff Altabef
> “The Wayward Sons of the Empyrean” Series by Adam Miller
> The “Eloah” Series by Lex Allen
> The “Matthew Bishop” Series by Burt Clinchandhill
> “The Tormenting Beauty of Empathy” by Richard Robbins
Available ebook formats: epub mobi pdf lrf pdb txt html
First 15% Sample: epub mobi (Kindle) lrf more Online Reader
pdb
Price: $4.99 USD
Buy Add to Library Give as a Gift
How gifting works
Create Widget
Tags: hell religious fiction science fiction demons steampunk sci fi religious fantasy dantes inferno
About William LJ Galaini

Having lived up and down the East Coast, William Galaini finally settled outside of DC after a charming stream of career failures that ranged from the hospitality business to the military. After marrying his college sweetheart, writing became his vehicle to pull his life together. Six novels, four cats, forty pounds, and one son later, you now can find him here at Evolved Publishing.

His work focuses on character revelation and multifaceted conflicts nestled within science fiction and fantasy settings. The influences that echo in his writing include role-playing games, classic literature, world history, and his personal experience. To recharge, he naps on the couch under his mother’s afghan, surrounded by his cats.

About the Series: Hellbound

Set in an industrialized Dante’s “Inferno” with steampunk trappings, the “Hellbound” series explores a series of adventures rising from the very depths of Hell.

Reviews of Patron Saint of Wrong by William LJ Galaini

You have subscribed to alerts for William LJ Galaini.

You have been added to William LJ Galaini's favorite list.

You can also sign-up to receive email notifications whenever William LJ Galaini releases a new book.