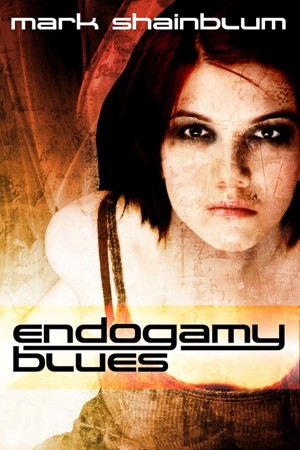 By Mark Shainblum
Montreal has fallen to the neo-fascist Liberators, and teen soldiers Joanie Morgernstern and Michael Cross are on the losing side. Joanie is an Augmented Human and a Jew. Michael is a Mohawk. Their fanatically racist enemies will show them no mercy.

Swept up in Canada's last, desperate attempt to stave off defeat, Joanie and Mike expect nothing but death. Instead, they find each other. More
The neo-fascist armies of the Liberator have swept across the Americas like a plague. Montreal is in flames, and the front is less than a kilometre away.

Seventeen year-old Private Joanie Morgernstern can expect no mercy from the victors. As a Canadian soldier, an Augmented Human and a Jew, she is a blood enemy to the Liberator three times over. Aircraftman Michael Cross, 16, a technician in the Air Force of the Iroquois Six Nations is on the same hitlist. Their fanatically racist enemies will show them no quarter and no mercy.

Swept up in Canada's last, desperate attempt to stave off defeat, Joanie and Mike expect nothing but death. Instead, they find each other. --

"(The Island Dreams anthology) closes on a high note with another of its best moments, 'Endogamy Blues' by Mark Shainblum… It’s exciting and full of interesting ideas…" -- Kit O’Connell, SFSite.com

Mark Shainblum is a science fiction, fantasy and graphic novel writer living in Ottawa, Ontario, Canada. His prose fiction has appeared in magazines like On Spec, Would That It Were, Thousand Faces and the anthologies Island Dreams: Montreal Writers of the Fantastic(Vehicle Press, 2003)and Playing Solitaire and Other Stories (Cyber Age 2001). With John Dupuis, he was co-editor of the Aurora Award-winning anthology Arrowdeams: An Anthology of Alternate Canadas, published in 1998. In comics he’s best known as the writer and co-creator of Angloman, a parody series published in two bestselling books, and later as a weekly comic strip in the Montreal Gazette. Mark also wrote and co-created the independent comic book series Northguard, and the mystery series The Haunting of MacGrath.

Mark is a past-president of SF Canada, Canada’s national association of science fiction authors. He lives in Montreal with his wife Andrea and daughter Maya.

You have subscribed to alerts for Mark Shainblum.

You have been added to Mark Shainblum's favorite list.

You can also sign-up to receive email notifications whenever Mark Shainblum releases a new book.