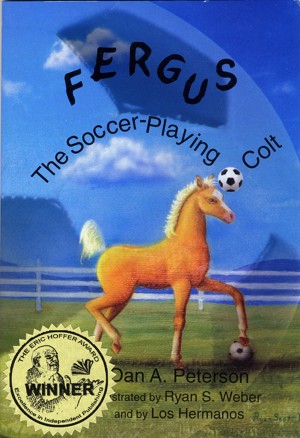 By Dan Peterson
An acrobatic colt joins his young master and his friend in a soccer game, proving unusual understanding and talent for the game. When his skill gains media attention, Fergus Bobby and Ramon are sent on a tour to promote soccer in the US. All is well until a conniving rodeo stock dealer and his bumbling henchmen abduct the colt. Suspense and humor fill this heart-warming tale of loyalty and love.

Dan and his wife, Birdeen, reside in Sandy, Utah. Their children have married and “left the nest,” but the cats, Milo and Rajah, still perform daily inspections of the house, while the lab, Jake, guards the deck and back yard. A palomino, a paint, and a POA mare and her young colt rule the pasture. Who knows what games Dan will teach this new foal to play.

For over 30 years Dan A. Peterson has been bringing people and books together. Dan is a children’s book author, representative for various educational publishers and co-owner of the Alphabet Station, a parent-teacher center. Holding degrees in both Journalism and English from BrighamYoung University, he has served as curricula evaluator for Behavioral Research Laboratories and the Dallas Independent School District, curricula developer for Thiokol Chemical Corporation, and editor for Harbrace Publications. Dan is the author of various freelance articles, with names such as “Reflections of a Suburban Cowboy” and also dabbles in writing narrative poetry.

Dan gained valuable insights into the special characteristics of horses during his childhood in rural Utah, where he rode calves for real silver dollars at the annual Cedar Fort rodeo. He sat on the rail fence for hours studying the wild horses, and many of his mounts were mustangs that had been captured and trained by his uncles. He learned never to underestimate a horse’s intelligence and unique personality.

Through a combination of his diversified background, fascination with horses, and the ability to see the world through the eyes of children, a story began to bounce around in his head about “a very unusual colt … who could dance like sunlight on water.” He gave the colt something exciting to do – play soccer with a couple of boys. After that the characters of the story took the reins, and his debut novel, Fergus,The Soccer Playing Colt, came to life.

You have subscribed to alerts for Dan Peterson.

You have been added to Dan Peterson's favorite list.

You can also sign-up to receive email notifications whenever Dan Peterson releases a new book.