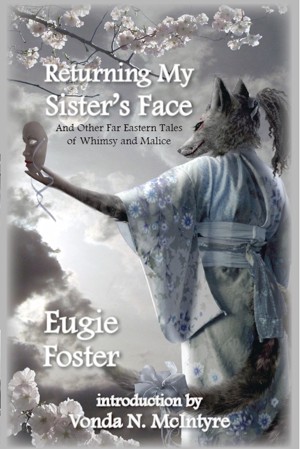 By Eugie Foster
Enchantment, peril and romance pervade the shadowy Far East. In these dozen stories of adventure and magic from the Orient, a maiden encounters an oni demon in the forest, a bride discovers her mother-in-law is a fox woman, a samurai must appease his sister's angry ghost, and dark and light are two sides of harmony. A striking debut collection from Eugie Foster. More
“Noted short story author Foster offers a dozen enchanting and sometimes chilling tales alive with elegantly sketched characters and sensibilities drawn from Asian folklore…Readers who long for a break from European medieval fantasy will be charmed and entertained by Foster’s tales.”
—Publishers Weekly

“The tales are beautifully written, elegant, passionate, funny and moving. The entire collection is a delightful, magical bridge across cultures. I hope many readers find their way to it.”
—Patricia A. McKillip

“Eugie Foster bridges the gap between the traditional fairytale and historical fantasy. Throughout the collection she alternates between re-tellings of Chinese and Japanese legends and original stories with elements drawn from the same deep wells. There is a formality to the writing that suits the traditional strain, giving a timeless authority to all the stories without making them unapproachable. On the contrary, they are charming to read.”
—Holly Phillips

“Lovers of fairy and folk tales who crave, as I do, stories from cultures not their own will delight in these deceptively simple tales. They are layered with tragedy and superstition, with spirituality and most importantly, with a fine sense of the marvelous.”
—Erzebet YellowBoy

Eugie Foster calls home a mildly haunted, fey-infested house in metro Atlanta that she shares with her husband, Matthew. After receiving her master's degree in psychology, she retired from academia to pen flights of fancy. She also edits legislation for the Georgia General Assembly, which from time to time she suspects is another venture into flights of fancy.

Eugie received the 2009 Nebula Award for Best Novelette and was named the Author of the Year by Bards and Sages. THE DRAGON AND THE STARS anthology, edited by Derwin Mak and Eric Choi, with her story, "Mortal Clay, Stone Heart," won the 2011 Prix Aurora Award for Best English Related Work. Her fiction has also received the 2002 Phobos Award; been a finalist for the Hugo and British Science Fiction Association awards; and been translated into eight languages. Her publication credits number over 100 and include stories in REALMS OF FANTASY, INTERZONE, CRICKET, CICADA, FANTASY MAGAZINE, and anthologies NEBULA SHOWCASE 2011, BEST NEW FANTASY, and BEST NEW ROMANTIC FANTASY 2. Her short story collection, RETURNING MY SISTER'S FACE AND OTHER FAR EASTERN TALES OF WHIMSY AND MALICE, was published in 2009 and has been used as a textbook at the University of Wisconsin-Milwaukee and the University of California-Davis.

Review
Andrew Rodda reviewed on July 13, 2012
(no rating)
Returning my sisters face was a lovely collection of eastern style folktales. I enjoyed each of the short stories and found it had to put down. Over all I would give it a 4.5/5. Oh so worth picking up if you at all like folktales or mythology.

You have subscribed to alerts for Eugie Foster.

You have been added to Eugie Foster's favorite list.

You can also sign-up to receive email notifications whenever Eugie Foster releases a new book.