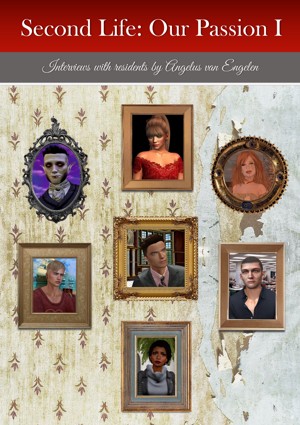 Second Life : Our Passion I

I will travel around SL and visit people who would like to be interviewed. I have 2 main questions:
1. Please show me your home (can also be a favorite spot) and:
2. What is your dearest passion? That can be anything. Cars, a new found love, flowers, designing. The only thing is that it must be your dearest passion.
Download: epub mobi (Kindle) pdf more Online Reader
lrf pdb txt
Price: Free! USD
Add to Library
Create Widget
Tags: second life interviews virtual world virtual design residents
About Angelus van Engelen

Angelus is a writer and a reporter who loves literature and art. He is passionate, friendly and open minded. He can be a bit of a hermit, but despite his introvert nature he sometimes goes out to seek friendship and inspiration.

On February 3 2021 he bought his own land in Second Life. With this, a long-held wish came true: his dream house: villa Utrecht by the Dutch SL creator Froukje van Hoorenbeek of Dutchie Furniture and Homes. Together with teadome De Vecht they now form the beautiful rural setting of Utrecht estate. By furnishing the land, Angelus was inspired by Dutch country estates and the canals of the old Dutch town Utrecht.

Also in 2021 Angelus began with the interview series Second Life : our passion. The intention was to interview various residents of Second Life and thereby describe from the inside the lives of those who populate this virtual world.

From time to time Angelus would like to invite other SL writers or lovers of literature in his salon.

About the Series: Second Life : Our Passion I

I wanted to do this project for a long time: an interview series with portraits of residents of SecondLife. I came to this idea because I hear so many people say about Second Life that the contacts there are a bit cold and shallow. With this blog series, and eventually the book, I will prove otherwise! My aim is to show that Second Life residents have a warm heart and live a passionate life. It is not my intention to practice in-depth psychology, nor is it my intention to reveal the real life character behind the SL resident. I would like to expose the characteristic and versatile aspects of being a resident in SL with lighthearted portraits.

Reviews of Second Life : Our Passion I by Angelus van Engelen

You have subscribed to Smashwords Alerts new release notifications for Angelus van Engelen.

You have been added to Angelus van Engelen's favorite list.

You can also sign-up to receive email notifications whenever Angelus van Engelen releases a new book.