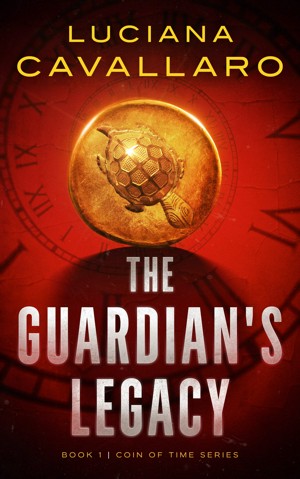 By Luciana Cavallaro
Rated 5.00/5 based on 1 review
One magical coin can change a life. Two can change the world.

A gripping story of an ancient cover up, a dangerous legacy and, the search for the most powerful object in the world: a three-thousand-year old coin.
The disappearance of an old man, fanatical neo-Nazis, and the hunt by Interpol, thrust Nikolaos Zosimos, a high schoo More
Quarterfinalist - 2022 ScreenCraft Cinematic Book Competition

An ancient cover up, a dangerous legacy and the search for the most powerful object.

A three-thousand-year old magical coin, the disappearance of an old man, fanatical neo-Nazis, and the hunt by Interpol, merge in this gripping story of an ancient cover up, and the transition of an ordinary man into the guardian of the most powerful coin on earth.

High school teacher Nik Zosimos, leads an uncomplicated life until he receives a cryptic phone message from his grandfather, Iasos. He hurries to his grandfather’s finding him relaxed and pleased to see him. A few beers later, Nik leaves his grandfather’s place, stupefied and astounded. Iasos has a secret, one that dates back to the time of Herakles.

But that was just a myth, wasn’t it?

Luciana Cavallaro’s alter ego is a high school teacher where she plugs away educating teenagers the merits of reading and ancient history. She often looks for a brick wall to bang her head when faced with disinterested looks from her students. She’s also a historical fantasy and thriller/suspense author, who creates fast-paced, action-packed series for her readers.

Born and raised in Western Australia, residing in Perth, Luciana loves to travel and since getting her passport at the ripe old age of twenty-four has visited Europe multiple times, a legacy of her Italian heritage. She enjoys being active, going out with friends, reading and tries to grow her own vegetables. She dreams of travelling again and visiting the ancient sites that inspired her stories, that is when she’s not spending time being an unofficial stunt person and knocking herself out in the process. Visit her website at https://luccav.me/

Reviews of The Guardian's Legacy by Luciana Cavallaro

Flip a coin and see where you land in the action/adventure book, "The Guardian's Legacy," by Luciana Cavallaro. This is Book 1 in the "Coin of Time" series that promises to be an action-packed tale with a likable hero reminiscent of Indiana Jones and Ben Gates in "National Treasure." The prologue begins in a heart-throbbing chase scene in which Nik and a mysterious woman are being chased by assailants on motorcycles. With a flip of an ancient coin, Nik teleports back in time and meets the Greek historian, Herodotus. I asked myself, "Whoah! What just happened?" and was compelled to read the book to find out.

In Chapter 1, the story begins ten months earlier when we are introduced to an unmarried high school teacher, Nicolaos Zosimos (Nik), with an unremarkable life. He receives an urgent call from his grandfather who then urges him to be the next protector of an ancient coin minted by Heracles. At first, Nik wonders if his grandfather has lost his mind but reconsiders after seeing treasures of ancient weapons in his grandfather's house. Further, his grandfather uses high-powered computers to search for clues where the second, identical coin might be. Together, the two coins have unknown powers that have been kept secret through the centuries in case they fall into the wrong hands. When Nik's grandfather detects clues that the second coin has popped in and out of different shops in Europe, he travels there to investigate. When Nik flies later to Europe, he discovers his grandfather has disappeared. More alarming, Nik is being hunted by fanatical neo-Nazis and Interpol, forcing him into action to become the guardian of the most powerful coin in the world.

Author Luciana Cavallaro has written a gripping action-adventure that promises time travel and teleporting in the series. As with her other books, the tale contains a fascinating historical backdrop on how Heracles forged metals used to mint the coins. Details from Greek mythology and the development of minting coins are seamlessly weaved into the plot without distracting from the fast-paced plot. The story follows the traditional structure of Joseph Campbell's The Hero with a Thousand Faces. The unlikely hero, Nik, is an ordinary man propelled into the role of a fierce protector of the ancient coin. The story ends on a climactic cliff-hanger. Lingering curiosity about the prologue compels me to read the entire series.

I highly recommend "The Guardian's Legacy" for readers who enjoy action/adventure with an archaeological flair and the unique premise of discovering the secrets of two ancient coins that could destroy civilization if it flips into the wrong hands.

You have subscribed to Smashwords Alerts new release notifications for Luciana Cavallaro.

You have been added to Luciana Cavallaro's favorite list.

You can also sign-up to receive email notifications whenever Luciana Cavallaro releases a new book.