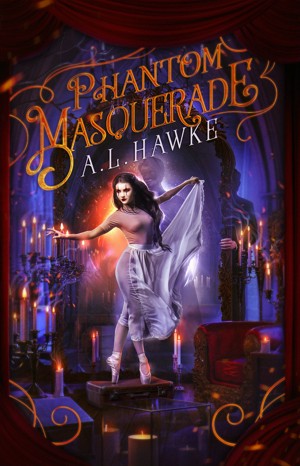 By A.L. Hawke
Mina dreams of performing on stage like her great ancestor Christine Daaé. Her close friend Toni Vollini offers her a role in his play mixing Mozart with clowns on Broadway. He says she'll soar, but with pathologic acrophobia, she’s afraid she’ll fall. And the voice in her head says she will. But Mina thinks the voice is a hallucination. Or is he the phantom of the opera? More
And here is where I fall.

Mina Daaé dreams of performing on Broadway. Like her great ancestor, Christine Daaé, who sang at the prestigious Palais Garnier a hundred years before, Mina has the voice of an angel. But after graduating from Conservatoire de Paris, fortune fails her. Until the circus comes to town.

Mina’s close friend Toni Vollini offers her a role in his new Broadway play mixing Mozart with clowns. Known as The Harlequin, the musical is an inimitable adaptation of the opera Don Giovanni. Toni says Mina will soar, but with pathologic acrophobia, she’s afraid she’ll fall. And the ghost in her head says she will.

Toni and a ghost vie for her love, but Mina thinks her ghost is just another hallucination. Or is her ghost a phantom of the opera?

Phantom Masquerade is a contemporary adaptation of Gaston Leroux’s Phantom of the Opera integrating romance and the paranormal.

A.L. Hawke is the author of the internationally bestselling Hawthorne University Witch series. The author lives in Southern California torching the midnight candle over lovers against a backdrop of machines, nymphs, magic, spice and mayhem. A.L. Hawke has published eight books specializing in fantasy romance and science fiction.

You have subscribed to Smashwords Alerts new release notifications for A.L. Hawke.

You have been added to A.L. Hawke's favorite list.

You can also sign-up to receive email notifications whenever A.L. Hawke releases a new book.