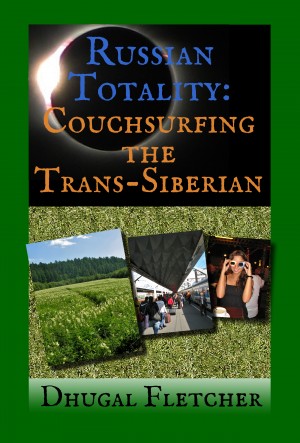 By Dhugal Fletcher
Ever thought about crossing Russia from coast to coast using the Trans-Siberian railroad?
Ever wondered what its like to live with people across Russia? Ever seen a Total Solar Eclipse?

Including over 100 pictures taken at the time, this story truly takes you along for the journey into the heart of Russia.

We journey from the Gulf of Finland in St Petersburg to the Bay of Amur in Vladivostok. This is a purely Russian expedition on the true Trans-Siberian route through the Urals, Siberia and into the Russian Far East. Visiting Moscow, St Petersburg, Yekaterinburg, Novosibirsk, Irkutsk and Vladivostok. In each city we stay with locals that are a part of the global Couchsurfing community and discover what it is to live with and like the Russian people we meet.

Dhugal Fletcher is a writer who has been undercover in the I.T world for fifteen years. Having done my time as a normal professional I realised it was time to set free the flying robot monkeys from their holding cages and start work on the orbiting battlestations that will bring me world domination.

From humble beginnings growing up in Darwin (REAL Australia) I spent many years living in Melbourne, Perth and Singapore. I’ve also wandered through various countries chasing four Total Solar Eclipses. I’ve been a keen festival participant and contributor, have written, directed, performed and sung my way through many theatre shows, I’ve travelled in China and Tibet for half a year, climbing mountains, wandering jungles and having beers with the locals. I’ve seen Everest at sunset, cooked Thai Green Curry for forty people at a party and argued politics with Syrian Christians. I’ve half converted Mormon missionaries to a life of hedonism and crossed Russia from St Petersburg to Vladivostok on the REAL Trans-Siberian train line; stopping in a number of cities – especially Novosibirsk for that Total Solar Eclipse.

So while work on the master plan is underway I decided to capture some interesting stories from my existence as a collection of mutually exclusive stereotypes. So what you can find are moments from travelling, living, exploring and pushing my feeble body into further decay. And beer and penguins. It’s always been about beer and penguins really. Except for the flying robot monkeys; they are the masterplan!!

Reviews of Russian Totality: Couchsurfing the Trans-Siberian by Dhugal Fletcher

You have subscribed to Smashwords Alerts new release notifications for Dhugal Fletcher.

You have been added to Dhugal Fletcher's favorite list.

You can also sign-up to receive email notifications whenever Dhugal Fletcher releases a new book.