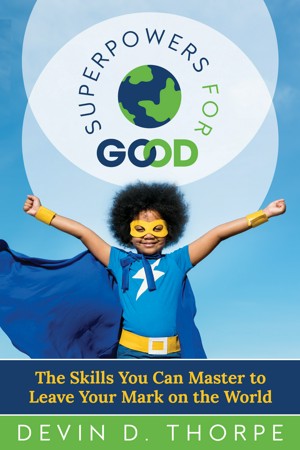 Superpowers for Good: The Skills You Can Master to Leave Your Mark on the World

Early praise:
Devin has leveraged his “superpowers“ to drive impact in the world his entire career, as an executive, through media and podcasts, as an author. In his new book, he assembles deeply personal stories that will inspire all of us to build a brighter future. ~Isabelle Hau

We all have a superpower, even if we don’t know what it is. Devin Thorpe’s ability to reveal the amazing powers of amazing people is unmatched. Superpowers for Good is an incredible collection of stories from people who are making an impact on the world around us. ~Richard Bliss

Superpowers for Good provides an accessible playbook to those committed to changing the world. If you want to know more about how some of the best leaders in the world do well and do good, then this is a must-read. ~David D’Angelo

I read it in one sitting! The most inspiring book I’ve read in years. It puts us in touch with both our humanity and our greatness. Awesome! ~Rebecca David

Devin did a phenomenal job putting together all of these inspiring stories from individuals across the globe doing amazing work for humanity. In my opinion, he is a superpower for good. ~Monique Ntumngia

Superpowers for Good is a treasure trove into the insight and inspiration behind some of the greatest people on this planet. Devin has put in the time and effort into interviewing hundreds of people to discover their true superpower and the magic behind it. This book is a love letter to motivation and incredible people that have changed the world, but it is also prescriptive in helping the reader to learn how they too can also leave their mark on the world. Tap into your superpower and read this book. ~Clint Pulver

A delightful and enjoyable read, the highlights of Devin’s years of interviews are compiled in a very simple to consume yet profoundly insightful book that will make you consider your Mark on the World.  Each chapter helped me reconsider my own Superpowers for Good. Although I began by skipping through chapters among his famous and popular guests, I was compelled to sit and enjoy every chapter, along with Devin’s powerful commentary.  He keeps the Promise of this book from his opening call-to-action: “Now, go find and master the superpowers you’ll use to leave your mark on the world.” It certainly drove me to find mine. ~Jason Hewlett

Devin has captured the essence of what drives (superpowers) people to do good for humanity.  The book, Superpowers for Good is a very interesting read with memorable stories of people doing good with helpful tips at the end of each chapter to help us to grow so we can leave the world a better place to live.  The collection of inspirational stories reminds us where we start in life doesn’t define us or where we finish in life, and we can all choose to finish strong! ~Steve Sterling

Through the pandemic, nurses and other frontline healthcare workers have proven beyond doubt that they are superheroes. Devin's Superpowers for Good is a guide that will help anyone develop the strength to do the good these heroes do every day. ~LeAnn Thieman

How delicious to the brain are knowledge and goodness!!! The world had desensitized me to what is real and true and good. This book brought those things back to me! Power and real-world knowledge to help me move forward and find and use my own Superpowers for Good!  ~Laura James

Devin Thorpe is a good man, and Superpowers is a great book.  ~Don Marsh

Devin D. Thorpe brings a broad perspective to financial planning, having owned and operated an investment-banking firm, which included an investment advisory business, a mortgage brokerage and having served in a variety of corporate finance positions.

Presently, Devin serves as a business professor at South China University of Technology in Guangzhou, China on behalf of Brigham Young University’s Kennedy Center China Teachers program. Previously, he served as the Chief Financial Officer for the multinational company MonaVie, listed in Inc. Magazine’s 2009 Inc. 500 as the 18th fastest growing company in America and, at $834 million in revenue, the third largest company on the list. Prior experience includes two years working on the staff of the U.S. Senate Banking Committee during Utah Senator Jake Garn’s tenure. He also served briefly in Utah State Government, working at USTAR under Governor Jon Huntsman. 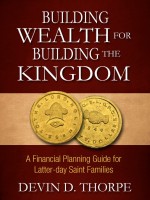 Reviews of Superpowers for Good: The Skills You Can Master to Leave Your Mark on the World by Devin Thorpe

You have subscribed to alerts for Devin Thorpe.

You have been added to Devin Thorpe's favorite list.

You can also sign-up to receive email notifications whenever Devin Thorpe releases a new book.