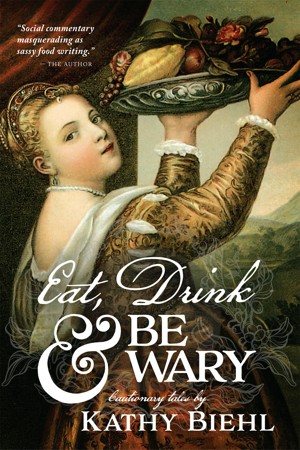 Essays explore the staying power of food memories, the non-rational but abiding appeal of junk food, and the complexities of dinner parties and dining alone. The collection also chronicles antics in bars and spectacular shortfalls in customer service, from both sides of the kitchen door (including shenanigans at the Dallas cantina that pioneered the margarita machine); arch an eyebrow at pretentious foodies, over-hyped restaurants, market researchers, and appalling entertainment; and take delight in generosity, from simple gestures to once-in-a-lifetime extravagance.

Beneath the wit and intricate, often outrageous detail is an intelligent, deeply personal understanding of the larger role that food and drink play beyond nutrition, which the author developed during 30 years of reviewing restaurants in Houston and New York and covering the specialty food industry nationally.

She proves that writing about food doesn't have to be so darn serious. I wish it could all be this fun. -- Sue Reddel, Food Travelist

Like going on a tasting tour -- with a menu that encompasses not just food but the deeply felt culture that surrounds it. -- Trav S.D., author
Available ebook formats: epub
Price: $7.99 USD
Buy Add to Library Give as a Gift
How gifting works
Create Widget
Tags: humor food writing humor essays food and drink food essays food nostalgia
About Kathy Biehl

Kathy Biehl has spent some 30 years being paid to eat, drink, and type up her observations. Her career began in Houston and coincided with its culinary scene rising to national prominence; her base of operations expanded to New York City and, eventually, the entire country.

For more than a decade she reviewed restaurants for The Houston Business Journal, Houston Press, Time Out New York (including its first dining guide), and a slew of online directories and guides. She also contributed cover stories to Houston’s dining magazine My Table, reported on wine for Publix Grape and wrote long-running food news columns for the doctor’s travel and leisure magazine Diversion and the legal research journal LLRX.com. She is the editrix and primary writer of the zine Ladies’ Fetish & Taboo Society Compendium of Urban Anthropology and its companion blogs.

Her food writing has won awards from the Association of Food Journalists and Houston Press Club, as well as the title “Pseudo Food Xpert,” bestowed by a review subject she’d caught impersonating a competitor. Informal honors include triggering the largest week of business a cafe had had in decades of operation and serving as litigation evidence, after a review tipped off a prominent chef that a former employee had walked off with his signature dishes.

Kathy is also an attorney and primary author of The Lawyer’s Guide to Internet Research (Scarecrow Press, 2000); a stage and film actress best known for the dowager role in the first-ever revival of the Marx Brothers’ earliest Broadway musical I’ll Say She Is; and a professional astrologer whose forecasts appear at EmpowermentUnlimited.net, OMTimes.com and the Professional Aquarian YouTube channel.

You have subscribed to alerts for Kathy Biehl.

You have been added to Kathy Biehl's favorite list.

You can also sign-up to receive email notifications whenever Kathy Biehl releases a new book.