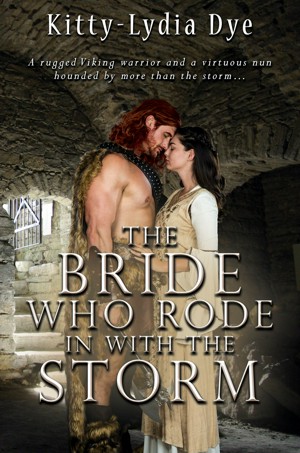 The Bride Who Rode in with the Storm

By Kitty Lydia Dye
A rugged Viking surrounded by treacherous assassins and a virtuous nun hounded by more than the storm. More
912, Heimer’s Settlement, East Anglia

A rugged Viking surrounded by treacherous assassins and a virtuous nun hounded by more than the storm. Two cultures collide when Anglo-Saxon Rosamund bursts into the mead hall of jaded Varangian Guard Grimulf and demands he marries her.

Since her nunnery was sacked, Rosa has been on the run. She has relied on her wits to keep her safe, but now she needs someone willing to wield shield and sword for her.

Grimulf is Rosa’s wild warrior, who conceals his past traumas from his years as a soldier in the East. Rosa is the innocent novice forced to bind herself to him for protection.

As their story unfolds, she discovers this broad, scarred hero has a tender, protective side. A complex man who does not force her to slake his lust but slowly seduces her until she is close to begging for his touch.

However, will the lies she has whispered in his ear be their undoing?
Available ebook formats: epub
Price: $4.99 USD
Buy Add to Library Give as a Gift
How gifting works
Create Widget
Tags: romance love adventure action coast warrior norfolk vikings wolfe rugged
About Kitty Lydia Dye

Kitty-Lydia Dye wanders the beaches for inspiration with her little Viking warrior, Bramble the dog. Her historical fiction has been influenced by local myths roaming the haunting landscape of the Norfolk marshes. The idea for her romance novel, The Bride Who Rode in With the Storm, came about after her recent move from the beautiful cathedral city of Norwich to the coast. Hemsby, the ‘by’ suffix meaning settlement in Old Norse, is believed to have been founded by Viking settlers.

Many of her short stories have appeared in The People’s Friend magazine. She has also released a collection inspired by Gaston Leroux’s The Phantom of the Opera.

She enjoys knitting dog jumpers, gazing at the waves at night, exploring church ruins as well as taking part in amateur dramatics (and played the part of an evil flying monkey!)

You have subscribed to alerts for Kitty Lydia Dye.

You have been added to Kitty Lydia Dye's favorite list.

You can also sign-up to receive email notifications whenever Kitty Lydia Dye releases a new book.