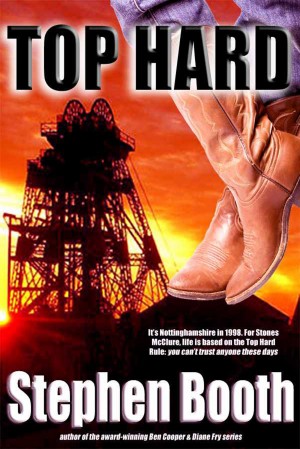 By Stephen Booth
An irreverent crime story set in the coalfield villages of 1990s Nottinghamshire, England, told in a unique voice, with a cast of extraordinary characters. From an award-winning British author, 'Top Hard' was a finalist for the Crime Writers' Association's Debut Dagger Award in 1998. More
As he watches criminals target a French lorry parked by the side of the road, Stones McClure thinks his plans might actually come together for once. He's looking forward to a life full of everything he could possibly want. Money, cars, a pair of fancy cowboy boots - who could ask for more? But things aren't always what they seem. And Stones should know it better than anyone.

It's Nottinghamshire, England, in 1998. Derelict pits, decaying villages, rundown housing estates - all surrounded by vast, historic mansions in country parks known as the Dukeries. And there's no sign of Robin Hood to spread a bit of the wealth around.

In a world full of injustice, among people still haunted by memories of the Miners' Strike, Stones is a man trying to put his old life behind him for good. But survival in these coalfield villages depends on the Top Hard Rule - you can't trust anyone these days.

Now it's all about to go very wrong for Stones McClure. Someone is out to get him. And most surprising of all, it isn't one of the women in his life...

Told in a unique voice, with a cast of extraordinary characters, 'Top Hard' is an irreverent crime story set in a memorable time and place. In 1998, it was a finalist for the Crime Writers' Association's New Writing (Debut Dagger) Award.

First 15% Sample: epub mobi (Kindle) lrf more Online Reader
pdb
Price: $2.99
$1.20 USD
Buy with coupon Use the code AGB60 at checkout for 60% off during our site-wide promotion!
(Offer good through May 31, 2020 )
Have a better coupon?
Add to cart, then apply your coupon
Add to Library Give as a Gift
How gifting works
Create Widget
Tags: thriller crime british humour mining robin hood sherwood forest nottinghamshire
About Stephen Booth

Stephen Booth is a multiple award-winning British crime writer, the creator of two young Derbyshire police detectives, DC Ben Cooper and DS Diane Fry, who have appeared in 16 novels, all set in England's beautiful and atmospheric Peak District. Stephen has been a Gold Dagger finalist, an Anthony Award nominee, twice winner of a Barry Award for Best British Crime Novel, and twice shortlisted for the Theakston's Crime Novel of the Year. DC Cooper reached the finals of the Sherlock Award for the best detective created by a British author, and in 2003 the Crime Writers' Association presented Stephen with the Dagger in the Library for "the author whose books have given readers the most pleasure". The Cooper & Fry novels are published all around the world, have been translated into 15 languages, and are currently in development for a TV series. The latest title is THE MURDER ROAD, with a new book SECRETS OF DEATH due in 2016. A former newspaper journalist, Stephen was born in Lancashire in the North of England and now lives in Nottinghamshire, near Robin Hood Country, with his wife and three cats.

You have subscribed to alerts for Stephen Booth.

You have been added to Stephen Booth's favorite list.

You can also sign-up to receive email notifications whenever Stephen Booth releases a new book.