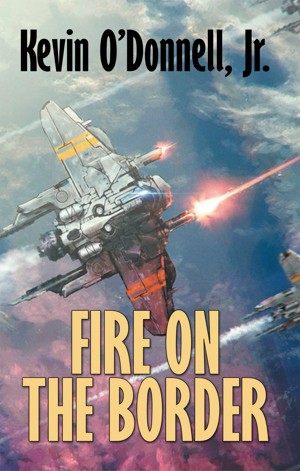 Fire on the Border

As the author of ten published novels and over seventy published short stories and articles, Kevin O’Donnell, Jr. had a devoted following of readers. One of his most popular and beloved works is the McGill Feighan series, a fast-paced and fun science fiction romp.

Kevin was an active contributor to the Science Fiction and Fantasy Writers Association. He chaired SFWA’s Nebula Award Committee, ran SFWA’s Bulletin, and served as Chairman of SFWA’s Grievance Committee, where he fought unceasingly for the rights of authors in an era of growing Internet piracy and corporate disregard of personal copyrights. As a result of these activities, he received the Service to SFWA Award.

Kevin spent much of his teen years in South Korea, where his father was Country Director for the Peace Corps. His interest in Asia and language skills led him to take his degree at Yale in Chinese Studies, where he met his wife Kim, with whom he was happily married until his passing in 2012. An avid gardener, O'Donnell delighted in raising bonsai, vegetables, and assorted plants.

WordFire Press is pleased to bring the works of Kevin O’Donnell, Jr. back into print for a new audience.

Reviews of Fire on the Border by Kevin O’Donnell, Jr.

You have subscribed to Smashwords Alerts new release notifications for Kevin O&rsquo;Donnell, Jr..

You have been added to Kevin O&rsquo;Donnell, Jr.'s favorite list.

You can also sign-up to receive email notifications whenever Kevin O&rsquo;Donnell, Jr. releases a new book.