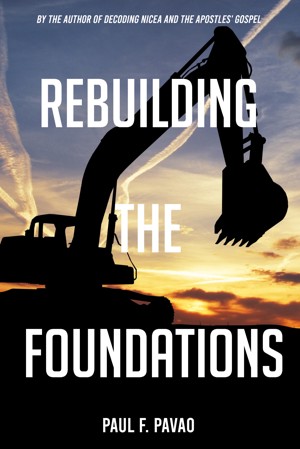 By Paul F. Pavao
The foundations of evangelical Christianity are set with the traditions of men and defended with unscriptural assertions. In _Rebuilding the Foundations_, fellow evangelical Paul Pavao exposes the traditions to the light of Scripture, then rebuilds with the words of Jesus and his apostles that directly describe the foundations of the Christian faith. More
"Some people may dislike this book. It upsets applecarts, slays sacred cows, demands that we 'go back to the Bible' and for all of those reasons all of us must read it." —John Tancock, Welsh apologist, speaker and missionary

In the late second century, Irenaeus—a missionary weathered with age, persecution, and the ravages of life among the barbarians—complained about the heretics of his time:

"By transferring passages and dressing them up anew, the Valentinians adapt the oracles of the Lord to their opinions. It is as if one, when a beautiful image of a king has been constructed by some skilled artist out of precious jewels, should then take this image apart, remove the gems, then reassemble them into the form of a dog or fox, even that but poorly executed, then should declare that this was the beautiful image of the king!"

The Reformers' intentions were good. They tried to assemble the image of our great King, but too many of the gems had been lost over the centuries and replaced with the catch phrases and proverbs of human tradition.

"Nor ought custom ... prevent the truth from prevailing and conquering, for custom without truth is [merely] the antiquity of error." —Cyprian of Carthage, A.D. 256

Paul Pavao reassembles the beautiful image of the King from the gems of Scripture, carefully guided by wisdom accumulated by Irenaeus, the missionary who penned those beautiful words above, and others of his time. The result is an image of the King, undeniably beautiful, that will stir the heart and awe the senses of those who love him and recognize him in these pages.
Available ebook formats: epub mobi pdf lrf pdb txt html
First 100% Sample: Online Reader
You set the price! USD
Buy Add to Library Give as a Gift
How gifting works
Create Widget
Tags: atonement christian history calvinism eternal security christian apologetics merciful god final judgment faith and works real salvation judged by our works
About Paul F. Pavao

Paul Pavao is the author of Decoding Nicea, Rome's Audacious Claim, and Rebuilding the Foundation, as well as several booklets. He primarily publishes on church history, and his previous books have covered the Council of Nicea and the history of the papacy. His books make academic subjects understandable and original sources available for the average reader. Reviewers regularly comment that his books are unexpectedly captivating.

Paul is primarily writing on overthrowing tradition to return to Scripture these days. This requires a strong effort to reject bias, hold allegiance to no denomination, but simply to the truth of Scripture. Paul's teachings are diligently compared to the early church fathers and publicly presented for review by scholars and non-scholars alike.

Paul is married to Lorie Pavao, and has six children and, as of 2021, four grandchildren. He lives in Selmer, TN and, as time permits, publishes books for other indie authors as well.

Reviews of Rebuilding the Foundations by Paul F. Pavao

You have subscribed to alerts for Paul F. Pavao.

You have been added to Paul F. Pavao's favorite list.

You can also sign-up to receive email notifications whenever Paul F. Pavao releases a new book.