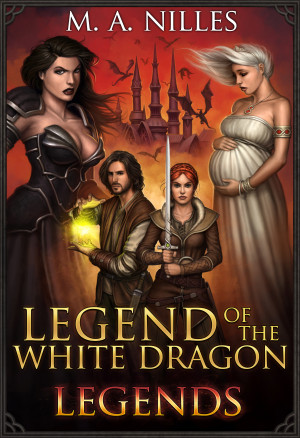 Legend of the White Dragon: Legends

By M. A. Nilles
Rated 5.00/5 based on 1 reviews
The beginning of an epic of many individuals whose lives have been linked in the battle for the fate of their world.

The sorceress Lusiradrol, exiled to human form thousands of years earlier from her life as the black dragon, has awakened her Red Clan.

Only one being can unite all who serve the Light, but he is not ready. His fate rests in the hands of those who waited. More
Legends is the beginning of an epic story of many individuals whose lives have been linked in the battle for the fate of their world.

The sorceress Lusiradrol, exiled to human form thousands of years earlier from her life as the terrible black dragon, has awakened her Red Clan. The true dragons are ready to renew their ancient wars to save the world, but they cannot do it alone. Unfortunately, the magi and the two races of men are far from ready to face the darkness unleashed by Lusiradrol.

The white dragon was made to banish her, one who could unite all beings of Light, but his return is not as any foresaw. Through a woman who guards his power and his spirit, he will be reborn. But will he be too late to save the world?
Download: epub mobi (Kindle) lrf more Online Reader
pdb
Price: Free! USD
Add to Library
Create Widget
Tags: magic dragons epic fantasy swords sorcery swords and sorcery
About M. A. Nilles

M. A. Nilles is the darker side of Melanie Nilles. Her published works under the name Melanie Nilles are young adult and adult romantic science fiction and fantasy, including the Starfire Angels series, the Adronis series, The Luriel Cycle trilogy, and other romantic-leaning works. As M. A. Nilles, she writes dark fantasy and science fiction, including Tiger Born, Spirit Blade, and the Legend of the White Dragon epic. More can be found at www.melanienilles.com.

Learn more about M. A. Nilles

Also in Series: Legend of the White Dragon

Really excellent book, so good that I've bought the rest of the series and can't wait to read them. Well written and the story makes you not want to put it down until you've read just one more page!

You have subscribed to alerts for M. A. Nilles.

You have been added to M. A. Nilles's favorite list.

You can also sign-up to receive email notifications whenever M. A. Nilles releases a new book.