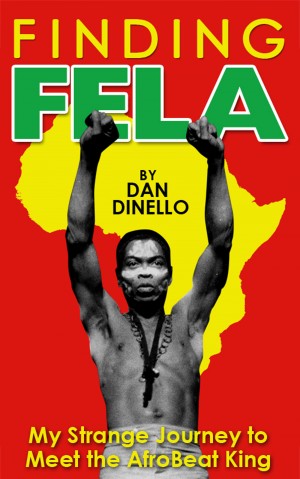 Finding Fela: My Strange Journey to Meet the AfroBeat King in Lagos [1983]

An author and filmmaker, Dan Dinello is Emeritus Professor at Columbia College Chicago. Besides the Smashwords ebook "Finding Fela," he wrote the book "Technophobia! Science Fiction Visions of Posthuman Technology" (2007) as well as chapters in "The Culture & Philosophy of Ridley Scott" (2013), "The Rolling Stones and Philosophy" (2011), "Philip K. Dick and Philosophy" (2011), "Anime and Philosophy" (2010), "Battlestar Galactica and Philosophy" (2009) & "Avatar and Philosophy (Wiley, forthcoming).
HIs most recent article "The Contagious Age" posted on Popmatters.com; he has also written about pop culture and science for the Chicago Tribune, Chicago Sun-Times, Salon.com and Manchester Guardian. Along with making several award-winning short films, Dan directed episodes of the Comedy Central television series Strangers With Candy and runs the Website Shockproductions.com where he sells two DVDs of his work (Shock Productions V.1 and V.2).

Army Arrangement
In this music video, Afrobeat rebel Fela Kuti performs "Army Arrangement" in London and Lagos (at The Shrine in Okeja). His performance is beautifully intercut with images of Lagos, including military occupation and police beating. It ends with news of Fela's arrest in 1984.

Reviews of Finding Fela: My Strange Journey to Meet the AfroBeat King in Lagos [1983] by Dan Dinello

You have subscribed to alerts for Dan Dinello.

You have been added to Dan Dinello's favorite list.

You can also sign-up to receive email notifications whenever Dan Dinello releases a new book.