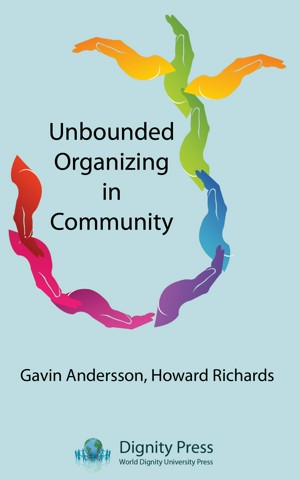 Gavin Andersson grew up in Botswana. While studying towards a BSc degree in Johannesburg, he became active in re-starting the black South African trade union movement and was banned by the Apartheid Government in 1976. To earn a living, he grew vegetables then co-founded a woodworkers’ cooperative. After five years under banning orders, he left South Africa for Botswana, where he became founder and coordinator of CORDE, strengthening cooperatives and founding several business enterprises. He later formed an Organisational Development consultancy, working across southern Africa and in the Caribbean.

Dr Andersson is a leading exponent of the Moraisean Organization Workshop (OW) and has adapted this methodology so that it now enables communities to tackle social and environmental issues alongside economic problems. Andersson has introduced the concept of Unbounded Organization to the field of organizational studies, (www.unboundedorganization.org)

Gavin was co-creator of Kwanda, a reality TV show where teams from 5 communities drew on the insights gained from a Learning Camp based on the OW to bring about a ‘community makeover’, with the creation of enterprises and new patterns of activity. Gavin was one of the pioneers of the Community Work Programme, which now provides regular and predictable work opportunities to over quarter of a million people across South Africa. In 2009 he co-founded the Seriti Institute (www.seriti.org.za) which strengthens community organisation for sustainable livelihoods and prosperity. He continues to be involved in social enterprise, currently forging trisectoral collaboration around agroecology, and enabling small farming enterprises to achieve economies of scale through cooperation. Gavin is a member of council of Mining Dialogues 360⁰ which convenes evidence-based dialogues about the mining industry and its impacts. He is Adjunct Professor at the Graduate School of Business at UCT.

You have subscribed to Smashwords Alerts new release notifications for Gavin Andersson.

You have been added to Gavin Andersson's favorite list.

You can also sign-up to receive email notifications whenever Gavin Andersson releases a new book.