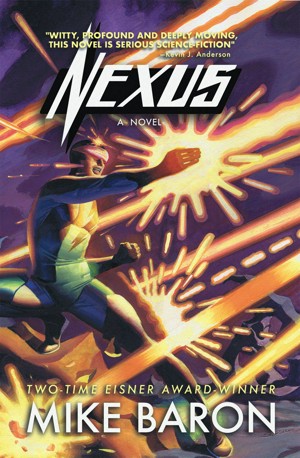 By Mike Baron
Nexus the cosmic avenger has faced mass murderers and alien monsters, but Gourmando is greater than all of them combined. Gourmando eats whole worlds and now he has come for Ylum. More
The popular comic hero stars in his first novel!
Nexus is the greatest avenger the galaxy has ever known. He has faced mass murderers and alien monsters.
But his power comes from an alien race with its own agenda. Is the mighty Nexus hero or pawn? Deliverer or destroyer?
Gourmando, the devourer of worlds, now has an appetite for Ylum, the home of Nexus.
How can one man, no matter how powerful, stop an entity that consumes whole planets?
Based on the bestselling comic book created by Mike Baron and Steve Rude, this is Nexus’s greatest adventure (for now, at least!).
Available ebook formats: epub
Price: $4.99 USD
Buy Add to Library Give as a Gift
How gifting works
Create Widget
Tags: thriller suspense adventure action aliens comic book galactic empire superhero comic
About Mike Baron

Born in Wisconsin, Mike Baron is best known for his comics work on Nexus, Badger, Punisher, Flash, Deadman, Star Wars, and Robotech. A perennial fan favorite, he is the winner of the prestigious Inkpot Award and the Eisner Award. He has written for every major comics publisher.

He broke into comics with Nexus, co-created with artist Steve Rude. Nexus currently appears monthly in Dark Horse Presents. Baron also created Badger, one of the longest-lived and most intriguing of independent superheroes. The Badger is a multiple personality, only one of whom dons a costume to fight crime. Badger returns this winter from a resurgent First Comics.

His novels include Skorpio, Helmet Head, Whack Job, and Biker. Baron lives in Colorado with his wife Ann and a bunch of mutts. bloodyredbaron.net.

Reviews of Nexus by Mike Baron

You have subscribed to Smashwords Alerts new release notifications for Mike Baron.

You have been added to Mike Baron's favorite list.

You can also sign-up to receive email notifications whenever Mike Baron releases a new book.