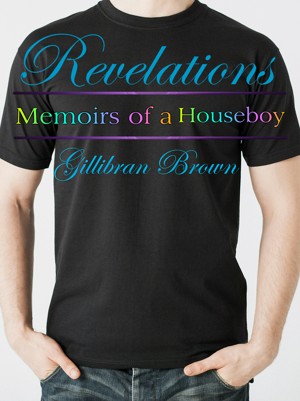 And they say miracles don’t happen. Ha! More
Here it is at long last, Revs - book six in the ‘Memoirs of a Houseboy’ series.

Revs isn’t about revelations in a grand sense, so don’t build your hopes up. There’s nothing biblical. I’m not a long-lost prince. I don’t have connections to mafia-style villains. There is no finding of ancient treasure or uncovering of plots to kill royalty and take over the world. My revelations are small fry. Basically, it’s just stuff, stuff about me and about other people too, though mainly about me, because I am that egotist, possibly even a narcissist, but nice with it. I wouldn’t personally harm a fly, not unless it harmed me first and even then I’d yell for one of the men folk to do it.

Anyway. It’s stuff that happened ages back, stuff I couldn’t write about at the time for one reason or another: I was too close, too raw, too emotional and maybe just not mature enough.

Reviews of Revelations by Gillibran Brown

Absolutely loved it! I recently read through all the books for the first time, and some how it had the perfect timing for my own life. I've been reading the blog since I was in my early 20s, much has changed since then. I'm not sure why I never read the books, but in a way, I'm glad I waited until now, because all of them, especially Revelations, hit on so many things I'm dealing with in my own life and drew many tears and laughs out of me. As a new writer trying to figure out things myself, I greatly admire your ability to tell stories. You convey humor and deep emotion so brilliantly!

This long-time-coming sequel to Christmas at Leo's sees the repercussions from the events of that book come to fruition. Things continue to be tense between Gili and the two men he shares a relationship with, Dick and “Daddy” Shane. The young man begins to seriously question whether or not there's a future for him in the household that's become the closest thing to a home he's had.

This sixth book of the series (not counting the many shorts also released) seems to be the culmination of the core story arc. It recounts events that are now more than ten years in the past, seven years since the last full book was published, and we sense a new maturity in the writer's voice, although the houseboy retains much of the cheeky attitude that has marked the books. As in the previous volume, much of the drama stems from Gili's failure to share his concerns with Shane as well as Dick. I had a bit of an epiphany about this towards the middle of this book: While the houseboy needs to bear a lot of the blame for the issues his behavior creates, it does demonstrate a lack of trust in his “Daddy” Shane, and for that, the Dom needs to shoulder at least some responsibility. I won't spoil the book by revealing whether or not Shane eventually redeems himself by the end.

One of the big questions of this series has been the degree to which the story is autobiographical. It's generally been my view that, while some events may have been exaggerated for effect, there's an element of truth to the stories and characters. This idea is further enforced by the voice of the narration in this book. Gili comes across as a very authentic character. In daddy kink terms, he is definitely a “brat” but while most brats in D/s stories are just attention-seekers, there are much deeper nuances to Gili. Sure, his actions get him lots of attention, but that's not primarily why he's doing it, and there are some deep psychological reasons behind his behavior.

In a similar way, Shane is far from your typical Daddy from kinky stories. He isn't all-knowing, and while he is well-to-do, he still has to work for a living running his own business. In short, he's very human, and he makes mistakes. This makes him a much more sympathetic character than he may have been in the first books.

Loved it! I didn't realize how much I missed the houseboy.

This book is such a precious gift to us, especially in hard time like this so thank you author.
Gillibran is an extraordinary writer, you can relate to his feelings, doubts and struggles. In many parts of the book I've cried,many other had melt my heart. The Gilli's emotions were described as pure and raw, and I've have loved every minutes.
I've loved all the revelations of the book, and the facts that we have discovered more of the past of both Dick and Shane. Special mention to Lee and his family. What a great character, I appreciate see Gilli interact with his childhood friends.
I've cried a lot also reading about the Dick's past. He is such a precious person, the way he comfort and loves Gilli is everything. And I'm completely obsessed with the chapter where Shane go to rescue Gilli in the hotel. No doubts that he love Gilli and it's beautiful see in how many different way Dick and Shane show their affection.This book is brilliant. Highly recommended.

The houseboy is back and better than ever. Those who have long awaited the next book in the series won't be disappointed. Gilli has traveled some rocky roads with Dick and Shane, but they come through stronger than ever. Highly recommended.

Love, love, love Revelations! Gilli is funny and makes life so interesting! He is able to take you away from your own troubles and enjoy all of the misadventures and trouble he gets into! Can’t wait to see more from him!

It was everything and more! Outstanding and Gilli's Writing has gotten eve better with age. Worth the wait!

"Revelations" delivers the emotional climax and resolution the other memoirs had been building towards with Gilli's signature blend of fragility and self-reflective poise.

Whoa, heartwrenching and simply gorgeous. Revelations is aptly named, and I'm stunned by how marvelous this book is.

If you've read Gilli's story, there's no doubt you've fallen in love with this young man, and Revelations will break your heart - so have tissues at the ready! I spent a great portion of this book in tears, but it is 100% worth every last one.

Please join me in my prayer that this is not the last we've heard from our dear houseboy.

(reviewed 19 days after purchase)
graybeth reviewed on Nov. 10, 2021
(no rating)
Waited a long time and it didn’t disappoint. Very poignant and heartfelt. Love your books so much. Even your diary posts are worth waiting for. Hope there are more books on the horizon and don’t keep us waiting that long. As Shane said,” they’re not getting any younger.” Keep up the good work. Fun read.

You have subscribed to Smashwords Alerts new release notifications for Gillibran Brown.