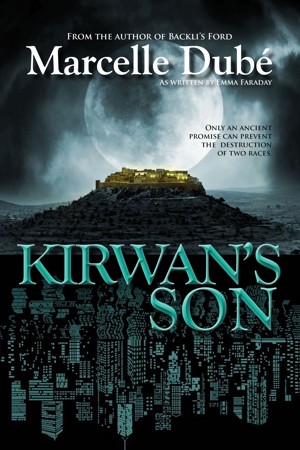 By Marcelle Dube
Almost four hundred years ago the Fey King Fin Bheara and the human Lord Kirwan pledged to come to each other’s aid if called. When war brews between the Seelie and Unseelie courts, the fate of humans and Fey rests on the shoulders of Mack, the eldest Kirwan descendant. All he has to do is survive long enough to honor the oath his ancestor took. More
Only the death of a good man can save the human and Fey worlds.

Stories—that's all they are. Passed down from generation to generation of Kirwans, the stories tell of the pact between the Kirwan ancestor and the Fey King Fin Bheara. But the stories are real and when the call comes, all four Kirwan siblings go to Fin Bheara’s aid to help free the Fey.

In a world of tortured tree nymphs and madness, the Fey king needs only one Kirwan, the eldest son, to save the trapped Fey, but all four Kirwans become pawns in the struggle for power between Seelie and Unseelie.

The Kirwans will risk everything—love, honor, and life—in the name of an oath taken centuries earlier, but will it be at the cost of spreading the Fey war to their own world?

Marcelle Dubé writes mystery, science fiction, fantasy, and contemporary fiction. She grew up near Montreal and after trying out a number of different provinces (not to mention Belgium) she settled in the Yukon, where people outnumber carnivores, but not by much.

In Kirwan’s Son, the four O’Rourke siblings and their estranged friend Grace suddenly find themselves in a world that—until now—belonged in the realm of family myth. They learn all too quickly that the myth is all too real, and all too deadly. Readers who enjoy strong characters thrown into unusual situations will love Kirwan’s Son.

Marcelle Dubé grew up near Montreal. After trying out a number of different provinces—not to mention Belgium—she settled in the Yukon, where people still outnumber carnivores, but not by much. Her short fiction has appeared in a number of magazines and anthologies. Learn more about her and her other published work, including novels, at www.marcelledube.com.

You have subscribed to Smashwords Alerts new release notifications for Marcelle Dube.

You have been added to Marcelle Dube's favorite list.

You can also sign-up to receive email notifications whenever Marcelle Dube releases a new book.