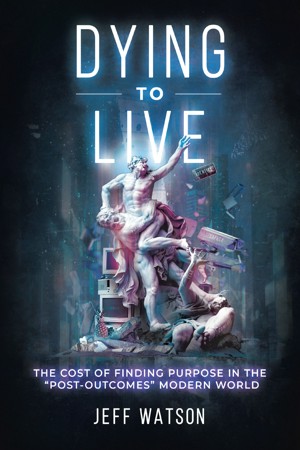 Dying to Live: The Cost of Finding Purpose in the "Post-Outcomes" Modern World

Enter the modern Western democratic world, a society experiencing a peak like few others have before it, and a time of unparalleled technological growth and progress.

In a period when we have never had so much available to us—food, water, shelter, education, mobility, medicine, intelligent machines, universal access to knowledge, constant entertainment, and on average nearly no individual existential threats— why is it that we've never been more at war with ourselves and each other? How is it that we are arguably the most divided, militarized, radicalized, ideologically captured, and outcome-independent we have ever been as a species?

Dying to Live explores some of the root causes of our societal entropy, existential malaise, and the divisive ideological extremism that permeates nearly every facet of our lives. We explore how the nexus of a type of "novel hierarchy of needs" that exists in an advanced civilization plays a central role in explaining, causing, or solving the crises we find ourselves in. Humans need certain things to simply remain biologically alive, but in the twilight of an apex civilization, we are only now beginning to reckon with what we need to truly live. Drawing on insights from his childhood, military service, and central position within the bleeding-edge technologies of our time, author Jeff Watson seeks not to tell you what or how to think, but to challenge you to introspectively analyze your life to better understand why you think, believe, say, and do what you do. As we approach cataclysmic levels of disunity and hatred within our societies, Watson offers a glimpse into the unconscious mechanisms that drive us into ever more tribal and isolated places. The hope for this book is to shine a light on the existential deficiencies and proclivities of modern humans in order to allow for de-escalation and deradicalization. This is not about a specific ideology, but rather the mechanism through which we become vulnerable and ultimately captured and radicalized by different ideologies.

There is so little that actually divides us, and yet those tiny differences, real or imagined, dominate our realities in ways that may soon be unrecoverable.
Available ebook formats: epub
Price: $4.99 USD
Buy Add to Library Give as a Gift
How gifting works
Create Widget
Tags: social media politics philosophy technology ideology
About Jeff Watson

The world offered that we are all irrevocably divided and that only extreme solutions or mandates could resolve our apparently irreconcilable differences. Watson joined the Canadian Armed Forces as an infantry officer at age eighteen, was promoted to the rank of Captain at age twenty-one, and deployed to Kandahar, Afghanistan, as a mechanized infantry platoon commander in the same year. He was slotted for a senior technological and policy position in the military upon his return, leading an army-level team fielding novel weapons systems, platforms, and supporting training design and policy.

He retired from the military in 2015, as he felt that the purpose and engagement he sought in that career was no longer present, opting to engage his passions as a private citizen. From experiences like professional musician to foundational partner in an artificial intelligence company to friend and counsel to close relations and even strangers in his life, Watson sought to better interface and understand the world and himself through a variety of means.

His focus has always been the improvement of humanity through understanding and growth. As he often says, "We should be doing so much better than we are today, but people would rather live in the fight than actually work to solve tangible problems in a material way."

Reviews of Dying to Live: The Cost of Finding Purpose in the "Post-Outcomes" Modern World by Jeff Watson

You have subscribed to Smashwords Alerts new release notifications for Jeff Watson.

You have been added to Jeff Watson's favorite list.

You can also sign-up to receive email notifications whenever Jeff Watson releases a new book.