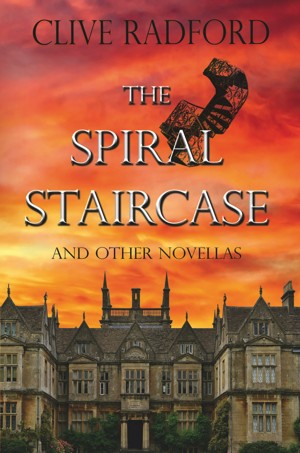 The Spiral Staircase and Other Novellas

When Francis Blake explores Eastgate House to find a new computer game theme, he becomes the target of a chimera in ‘The Spiral Staircase’, the supernatural encounter resulting in his breakdown. Recovering, he returns to Eastgate House where the phantom engulfs him, becoming his nemesis.

Born into the Cold War age and the rise of the Beatles, ‘Growing up with the Rolling Stones’ charts the experiences of Gavin Anderson. Enthralled by the Rolling Stones, he makes them the centrepiece of his nascent years.

When Renata Lapham becomes agitated by Radio Islington talk show host Jarred O’Gara, it leads to an unexpected confrontation and a very gory conclusion in ‘Death of a Radio Talk Show Host’.

In ‘Journeys End’, domestic and career ambition conflicts between Kory and Candice Farnham come to a head in an unforeseen Belize cataclysm.
Emile Chevalier wrestles with distilling great performances from prima ballerinas Madame Blanchard and Madame Dubois in ‘The Ballet Meister’s Calling’.

Cursed by a deceitful hussy, ‘I Dream in Technicolour’ sketches Gene Fogarty’s restless nights resulting in years of unresolved psychoanalysis with Dr. Cribb.
Authors’ Mikhail Bulgakov and Vladimir Nabokov lock horns in their drive to discover a source of inspiration to endow their works with brio in ‘Kashmir: A Visionary’s Tale’.

His poetry has been published in numerous poetry magazines such as The Journal, The Cannon's Mouth, Poetry Monthly, Poetry Now, Storming Heaven, Poetry Nottingham, Scripsi and Modern Review, plus in many compilations by United Press.

'One Night in Tunisia', 'Zavrazin' and 'Bullet' have all been converted into three-act screenplays.

The 'Zavrazin' screenplay is under contract with Story Merchant/Atchity Productions for film production.

His work has a distinctive voice setting it apart and appealing to those fascinated by intrigue, and who question status quo accepted views.

Reviews of The Spiral Staircase and Other Novellas by Clive Radford

You have subscribed to alerts for Clive Radford.

You have been added to Clive Radford's favorite list.

You can also sign-up to receive email notifications whenever Clive Radford releases a new book.