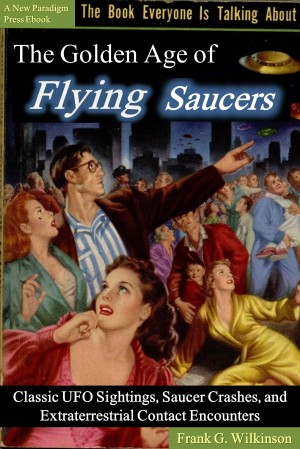 Although a relatively short book, it nevertheless provides a good overview of the topic. It starts off with the author's background on how since childhood he had developed a fascination with UFOs. The book then covers the time period from 1953 to 1975, in what the author calls the "Golden Age of Flying Saucers," where he covers some of the main UFO and supposed alien encounters during this period. These include the famous Roswell incident in 1947 that made international headlines of an alleged crashed saucer, as well as Captain Mantell's fatal plane chase of a UFO that was also spotted by military ground control. Amongst the "contactees" the author has chapters on George Adamski and the lesser known Truman Bethurum. UFOs and alien encounters are very controversial subjects, but the author has done well to present a plausible explanation towards the extraterrestrial hypothesis. On the down side, the book mainly presents the one side of the argument, and it lacks proper referencing. However, a bibliography is presented at the end of the book, as well as a glossary and descriptive chronology of major UFO sightings and events.

You have subscribed to alerts for Frank G. Wilkinson.

You have been added to Frank G. Wilkinson's favorite list.

You can also sign-up to receive email notifications whenever Frank G. Wilkinson releases a new book.