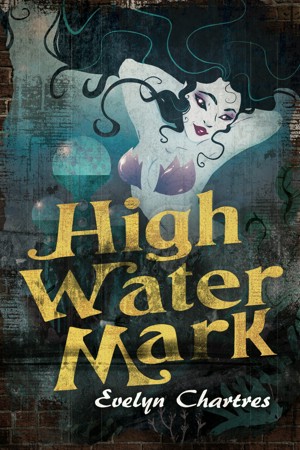 Rated 4.00/5 based on 1 review
When humanity has been driven into the sea, what lurks above the waves? More
Anna is a humanoid mermaid who spends her days with the local timekeeper until a podmate comes to her with a proposal. They hatch a plan to head out into the watery ruins of humanity in search of lost technology and materials. For a young mermaid living in the dredges of society, the promise of riches from such a find is just too big to pass up.

Armed with nothing more than an old map and some rusty road signs to follow, they are soon reminded that adventure often brings forth more than its fair share of rough waters. Her friend gets captured, leaving Anna alone in a world where mermaids are nowhere near the top of the food chain.

Follow Anna as she makes landfall and learns why her ancestors abandoned the surface. Lost in a world that is perpetually covered in a thick fog, Anna must navigate through what remains above the high-water mark. What will she find? An ally? A foe? Or will she find nothing more than death and destruction?

Evelyn Chartres is the nom de plume for a self-published Canadian author. The writer of seven Gothic fantasy novels, Evelyn released her debut novel, The Portrait, in 2016, and her latest, Dark Hearts, in 2022.

A fan of the phrase “live to eat,” Evelyn shares her recipes on evelynchartres.com. These recipes have a loose focus on French-Canadian cuisine, which feature deep-dish meat pies, seafood, and desserts that are rarely seen outside of La Belle Province.

Evelyn is currently living in Halifax, Nova Scotia, and is busy laying the foundations for her next book featuring Clara Grey.

Hard to say whether this is intended to be sci-fi or fantasy. I'll call it a fantasy wrapped in sci-fi clothing. It takes place in the future when an unexplained form of air pollution has driven humanity into the sea. They've been genetically modified with gills and some have grown tails for swimming. The land is now populated with werewolves, ghouls, vampires and/or some form of aliens. The quest of the story is to find the main character's friend who was captured by something. She meets up with a vampire who had been friends with her great great grandmother two hundred years ago and they go on an adventure. There not TOO much violence, but what there is, is gruesome. There are a few lesbian thoughts that are not acted on, no other hints of sexuality. The proofreading is very good. It might be trying to say something about the environment and something about friendship, but mostly it's just about a fun read.

You have subscribed to alerts for Evelyn Chartres.

You have been added to Evelyn Chartres's favorite list.

You can also sign-up to receive email notifications whenever Evelyn Chartres releases a new book.