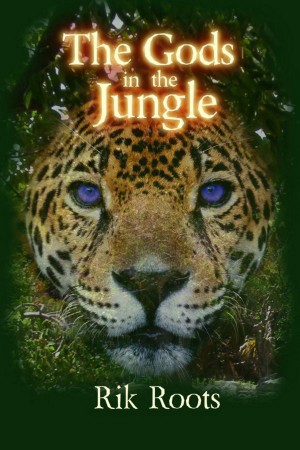 The Gods in the Jungle

By Rik Roots
Rated 4.50/5 based on 2 reviews
The jungle city of Bassakesh holds the keys to the future of the Vreski Empire; it is the sole source of the valuable Vedegga dye.

Delesse, the Governor's daughter, is marrying Loken, heir to one of the most powerful Clans in the Empire.

Rik lives in London with his partner, Nigel, and their two cats. As can be seen, he does not photograph well.

Book trailer video
My first attempt at a book trailer!

Reviews of The Gods in the Jungle by Rik Roots

A great, meandering stroll through the jungle, complete with wildcats, dangerous trees, and dragons.

I was a bit skeptical when it came to the beginning of this book, the forward, but I was immediately put right by the beginning of the story. It centers around a conflict between the Servants and the Tall Ones, the latter the ruling class of courtiers, Lords and Ladies.

From the start I was entranced by the beauty of the storytelling, the clear and unmistakable voices of the various, well-written characters, the setting with its Machiavellian political machinations and Byzantine social structure. Tuuke was my favorite character, and probably the author's as well. Perhaps I presume too much.

My only gripe was with the setup of the world. In the beginning, with its dusty streets and open markets, seemed a sort of high fantasy setting (in the jungle). Fast forward over a hundred pages, and here comes steam driven machines and electric lights! Even later on, we have guns! We need mention of this before the halfway point in the book.

Overall, I give this book five stars for aspects I don't often see in Smashwords books: great formatting, clear and powerful storytelling, a complete story (no breaking it into parts and tacking on TO BE CONTINUED), for drawing me in and making me care about the characters, and for having a great vision. The thematic elements, of views on life and death, of upper versus lower class, only slowed down the story in one tiny place and really, if that's the biggest problem with a book on Smashwords, it deserves six stars. Mostly those thematic elements held the story together exceedingly well.

Last note: there were two character names that got stuck in my teeth, and no matter how I tried to wiggle my brain, I couldn't dislodge them. Most of the names were just fine. But these two were main characters, and it was very distracting at times to read those unpronounceable names over and over and over again.

I managed to tear through this fairly quickly; it's one of the better books I've read in a while. The writing style is excellent, especially the use of detail to ground the story and add some realism, but without swamping the reader; there's always an excellent picture of events, and its clear the author has a clear image of what's going on in his head. The frequent mentions of uses of the warding system are especially well done. Similarly, although one gets enough information about the world to avoid frustration at wondering what's going on, at the same time enough is left unexplained that one gets the sense of a larger and very well integrated world that one discovers gradually as the book progresses. And although the story deals with a wide range of topics and themes, the writing remains consistently terrific throughout. My one major gripe was the ending. I was rather sad there had to be one, but even more so because it seemed a bit rushed, seemed to leave some threads hanging; the reader is left with no few questions, some of which are rather large and close to the plot. However, on the other hand, the work does fit in with a larger setting, which I believe is documented in other places, including the events resulting from this book. Over all, however, I really loved it; could I add another half star, I certainly would.

You have subscribed to Smashwords Alerts new release notifications for Rik Roots.

You have been added to Rik Roots's favorite list.

You can also sign-up to receive email notifications whenever Rik Roots releases a new book.